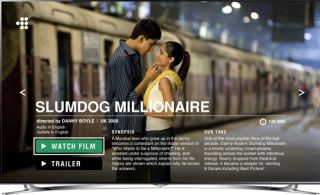 Users can watch an assortment of films which are hand-picked by MUBI editors. There are currently 30 films to choose from, but the library is updated daily. Titles so far include The Fifth Element, Oldboy and Slumdog Millionaire.

A subscription service, MUBI costs £2.99 a month for unlimited streaming access. So decent value compared to rival services, provided you like the taste of the MUBI editors...

Guy Kinnell, Head of TV and AV at Samsung Electronics UK & Ireland, said: "The addition of MUBI to the Samsung Smart Hub not only strengthens our film offering but provides our customers with even more variety, choice and entertainment for their viewing.

"From a carefully curated collection of film classics and fan favourites, customers will be guaranteed the very best of cinema straight into the living room."