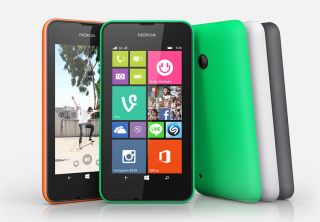 The handset is expected to be available from next month (August) in both single-SIM 3G and dual-SIM 3G variants, with the launch designed to open up Windows Phone to even more consumers thanks to its price.

It will run the latest version of Windows Phone 8.1; has a quad-core Qualcomm Snapdragon processor under the cover: and offers up to 4GB of onboard memory, which can be expanded to 128GB.

Other features include its 4in LCD display and 5MP camera, while Microsoft also says the Lumia 530 will be able to deliver "seamless integration" with other services such as Skype and MS Office.

The launch of the new Lumia 530 comes after Microsoft announced it would no longer produce Android-powered devices, with Nokia X designs and products absorbed into the Lumia brand.

In addition to the handset, Microsoft has also unveiled the €19 (£15) Bang mini speaker by Coloud, which is described as the "ideal companion" to the Lumia 530 and is due for release "in the coming weeks".