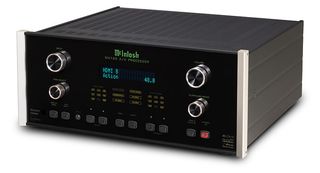 It's been a good few days for high-end kit, with this £14k AV processor following in the footsteps of the £15k Wilson Benesch Discovery II speakers and the £7k Luxman amplifier.

The retro design belies a tech-packed product, with the MX160 supporting the 3D audio formats Dolby Atmos (up to 7.1.4) and Auro-3D, as well as McIntosh's RoomPerfect technology, which is designed to adjust the audio output to the specific acoustics of your room.

Dolby TrueHD and DTS-HD Master Audio are also on board, while the MX160 can also handle native 4K Ultra HD content and upscale lower resolution 1080p, 720p and 576p/480p sources to 4K resolution. 3D video pass-through is also part of the exhaustive spec.

Connections include eight HDMI inputs and four HDMI outputs, four optical and three coaxial inputs, one USB that support audio up to 24-bit/192kHz, four pairs of stereo unbalanced inputs, a dedicated phono input and a set of 7.1 multichannel unbalanced inputs. There's also an HDBaseT output aimed at custom installers and capable of delivering a multitude of AV signals simultaneously. Safe to say McIntosh is pretty confident it can cater for any current and future compatibility.

All the analogue and digital connections can be renamed to make selecting the right input easier, while bass and treble controls are available for fine tuning.

And it wouldn’t be a McIntosh product without the iconic black glass front panel, illuminated logo and brushed-aluminium end-caps. The MX160 is available to order now for a cool £14,000.