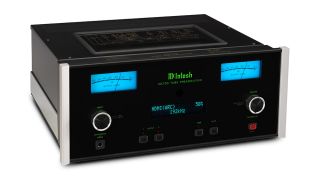 McIntosh has launched a new 16-input, seven-output preamp that utilises both its 70-year history in vacuum tube technology and its latest, new-and-improved DA2 digital-to-analogue converter.

The second McIntosh product to feature the replaceable DA2 module, following the C53 preamp announced earlier this summer, the C2700 is more than well equipped for the job at hand, with USB (native DSD512/DXD 384kHz), coaxial, optical (24-bit/192kHz) and nine analogue (balanced and unbalanced) connections at its rear.

Additional moving coil and moving magnet phono inputs cater for the hook-up of any turntable, while a HDMI ARC output enables the passthrough of audio (including Dolby and DTS surround formats) from a connected TV. Support for HDMI CEC means the C2700’s own remote can be set-up to control the TV’s power and volume, too.

Last but, for owners of McIntosh kit anyway, not least is a MCT port, which offers a secure, quality connection between the C2700 and the brand’s MCT series of SACD/CD transports for SACD playback.

The downside to having both analogue and digital circuitry in one box is potential interference and, thus, signal distortion – but McIntosh has worked hard to prevent that by implementing a dual-chassis design.

Hand-built “to last” in McIntosh’s New York factory, the C2700 costs £10,495/$8000, and is expected to begin shipping to the UK in September following US availability a month prior.

McIntosh MTI100 is an all-in-one turntable with Bluetooth