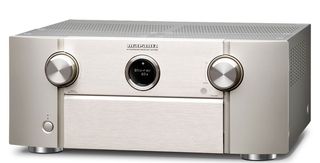 The Marantz SR7009 (pictured) has audio processing capabilities that allow it to handle up to 11.2 channels of sound, with added support for Audyssey DSX, DTS Neo:X 11.1 and Dolby Atmos encoding.

Marantz's Audyssey MultEQ XT32/LFC Pro calibration software has received an upgrade, meaning users now get an even more accurate calibration of their system. Other features include built-in wi-fi and Bluetooth, gapless playback, as well as support for Apple Lossless, FLAC HD 24/192, DSD and AIFF network streaming. Spotify Connect and Apple AirPlay streaming options are included too.

The SR7009 features eight HDMI inputs with 4K/60Hz pass through support and three HDMI outputs - two for the main system and the third that will be dedicated to multiroom purposes.

Meanwhile, the SR6009 supports Dolby TrueHD and DTS-HD Master Audio and incorporates the latest Marantz-developed HDAMs - Marantz's own discrete circuit boards that have been designed to to replace standard integrated circuits. Some of the SR7009's features have been passed down to its sister unit, including built-in wi-fi; Bluetooth; and DLNA networking capabilities. An iPod digital-compatible USB port and a phono MM input can also be found onboard.

The SR6009 too benefits from Audyssey DSX and DTS Neo:X 7.1 processing, with each of the seven channels receiving 185W of power. It has seven HDMI inputs and two outputs - one for the main system and one for multi zone.

In addition to the two new home cinema receivers, the Japanese manufacturer has introduced the CD5005 and PM5005 entry-level hi-fi components.

The CD5005 benefits from the Marantz-own HDAM-SA2 and an upgraded 24/192 DAC, as well as a new CD mechanism - both taken from the CD6005. It can playback CD, CD-R, CD-RW, along with MP3 and WMA files. An Audio EX(clusive) mode improves sound quality by turning off other select functions such as digital output and pitch control when not in use.

An upgraded remote control and low-power standby modes are enhancements over its predecessor - the CD5004 - and the CD5005 also offers digital optical and coaxial inputs, as well as gold-plated analogue outputs that are designed provide the best connectivity.

The PM5005 (pictured) integrated amplifier, meanwhile, features current feedback architecture - something Marantz claims is a feature normally reserved for more expensive models. The result is a "perfectly balanced stereo sound as well as a very open and precise sound stage".

The amp offers 55W of power per channel into 4 ohms and features a metal chassis and front panel for extra rigidity. Other features include a phono MM equaliser and Source Direct functionality.

MORE: Read all our Marantz news and reviews