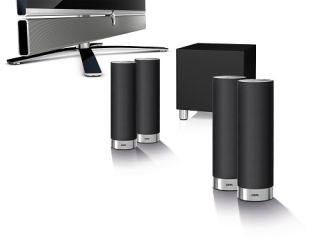 Having shown a prototype at Berlin’s IFA show at the end of 2012, the Loewe 3D Orchestra wireless home cinema speaker system is now ready to go – and it’s enjoying its world premiere here at ISE 2013 in Amsterdam.

Available as a 3.1 or 5.1 package, the 3D Orchestra features active, wireless, cylindrical speakers that fire sound both upwards and downwards.

The theory is that the audio ‘sweet spot’ can be made much, much larger while at the same time allowing the speakers to be far more forgiving of their position within the room. We shall see.

It almost goes without saying that, as a Loewe product, the 3D Orchestra is beautifully built and finished, is available in numerous colour options and looks like every bit a premium product.

Whether or not it ‘guarantees perfect surround sound in every home cinema’ as Loewe asserts, we will only be able to judge when the 3D Orchestra goes on sale in March - and we look to get our eyes and ears on it for review.

UK prices and more details are set to be confirmed closer to the launch.