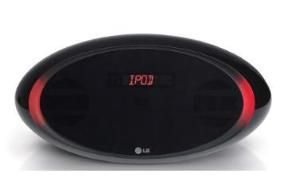 LG claims that you can copy one hour of recorded footage to DVD in just 27 seconds. Other features on all the models include HDMI 1080p upscaling, DiVX playback, a USB input and an optical output.

New iPod docks and micros systems
Next up is a new iPod dock. The high-gloss PC12DAB unit (pictured) features a CD drive and DAB capability. It can rip CDs to a portable music player too, with LG pitching the dock as a simple device which can rip tracks without the need for a PC.

It features a four-mode audio equaliser – pop, rock, jazz and er, ‘flat' in addition to a bright LED clock display. The PC12DAB goes on sale at the end of July.

The FA163DAB is a £200 micro system with DAB and iPod functions. We've already covered it here, so expect a full review later this month when the FA163DAB hits the shops.

The DP391B on the other hand, is a sleek slab which allows discs to be placed just behind the screen. LG suggest that the size makes it an ideal digital photo frame. It has 256MB of internal memory and can read SD and MS cards, should you wish to put family photos on there.

A DVD home cinema system, the LG HT953TV, marks the end of the line up. We'll have more details very soon.

Finally, Mr Mark Levinson is working with LG, tuning the above products but Mark is also helping the company develop a range of high-end hi-fi products which will debut at CES 2009 in January. Expect more details shortly.