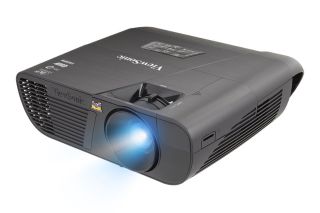 More PJD6 Network Series products are expected to be revealed later in 2015, with all projectors to offer "smart features" including ViewSonic's HDMI-MHL PortAll secure streaming technology.

MORE: Read all our ViewSonic reviews and news

SonicExpert for enhanced integrated sound is also among the features of the PJD6 range, with a select number of models also featuring a throw ratio said to be ideal for replacing 3LCD models.

Elsewhere, the range incorporates SuperColour technology with a newly-designed colour wheel and 3200 to 3800 lumens of brightness. XGA and WXGA resolutions are also included.

In terms of the inputs, you'll get a pair of HDMI ports – including a MHL-HDMI for media streaming dongles like Chromecast – and a RJ45 port for networking, plus two VGA and composite video.

In addition, a new ViewSonic WPG-300 streaming dongle is primed for launch in Q2 2015 priced at £129, with wi-fi display and screen mirroring expected to be among the product's features.