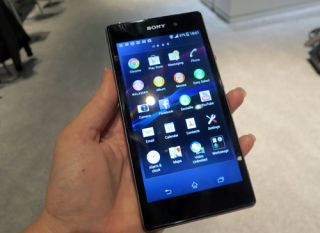 Sony’s big IFA 2013 smartphone unveiling wasn’t exactly the best kept secret the internet has ever seen. For months, rumours have been swirling about the successor to the Xperia Z, codenamed the Honami Z1. At Sony’s IFA 2013 press briefing, we got the first official view of it, with its official name, the Sony Xperia Z1.

The Sony Xperia Z1 bears more than a passing resemblance to its predecessor, and continues with the rather angular ‘Omnibalance’ design language that began with the Xperia Z. It feels nicer though and somewhat more refined – it’s slimmer for a start, and the edges feel slightly less harsh so it’s more comfortable to hold. The tempered glass, front and back remains, but there’s a solid, one-piece, two-tone aluminium frame that feels both sturdier, and more premium, than that on the Xperia Z.

This aluminium finish adds a bit of weight to the handset, but that’s not to its detriment. It feels like a quality product, and it’s certainly a long way off feeling hefty or cumbersome.

Sony’s sticking with the waterproofing too, and the Z1 is able to be dunked in water and used with wet hands without issue. It’s managed to waterproof the 3.5mm jack this time though, meaning there’s no annoying port cover to remove and replace every time you want to listen to some music.

As for finishes, the Xperia Z1 will be available in a choice of black, white and purple.

While it may cut a similar shape on the outside, Sony has done plenty of updating when it comes to the inside. The new 2.2GHz quad-core Qualcomm Snapdragon 800 processor is the engine behind the Z1, in place of the Xperia Z’s 1.5GHz quad-core chip. There’s 2GB of RAM too and 16GB of storage, expandable up to 64GB via microSD.

Zipping through the various menus of the Z1, we saw no lag or delay, and switching between apps was smooth and bug free. Of course, we’ll be really putting it through its paces in our full review, but on first impressions, it certainly seems that the 2.2GHz powerhouse chip is doing its job.

The Z1 will run on Android, 4.2.2, with Sony’s fairly unoffensive skin sitting over the top. It’s one of the better skins out there, and comes with various Sony apps pre-installed, such as the Movies and Walkman apps, plus access to Sony services such as Video Unlimited, Music Unlimited and the recently updated Play Memories Online photo service.

Battery life sounds promising, with a sizeable 3000mAh battery and Sony’s Battery STAMINA mode on board to turn off power hungry apps and functions when not in use.

The Sony Xperia Z1 will be a 4G handset, complete with NFC for One-touch pairing and sharing with various other Sony products (such as Bravia TVs and compatible Sony docks), as well as some interesting Xperia Z1 accessories (more on this later).

Despite being physically larger than the Xperia Z, the Xperia Z1 keeps the same-sized 5in 1920x1080 Full HD screen. However, Sony has implemented the Triluminos technology found in its Bravia TVs to help recreate more vivid, realistic colours on mobile too. A quick comparison of the same photo between the Z and the Z1 shows blues, reds and greens (the colours Triluminos targets) much richer on the Z1, with more shades noticeable within them.

It’s a very nice display indeed, with stacks of detail too. Viewing angle looks like it could be wider though, as there is a certainly amount of drop off to colour vibrancy when content is viewed from the side.

Like so many other smartphones at the moment, the camera on the Xperia Z1 has been a huge focus for Sony. For a start, it’s a whopping 20.7MP, taking a big step up from the Z’s 13.1MP offering, and making it the highest-res Android phone on the market. For now at least.

But it’s not just all about megapixels – Sony has also squeezed in a lot of other camera tech too, including a large, custom-made 1/2.3 CMOS image sensor, Sony’s award-winning G Lens, with 27mm wide angle, an F2.0 aperture for bright photos in low light, and a BIONZ mobile imaging processing engine – all which add together to create an experience Sony says offers the same quality and performance of a conventional compact camera.

We took a few test shots and found colour reproduction to be true, focus to be sharp and pictures to be full of detail. Compared to the iPhone, it did a better job at lighting up a low light snap too, so more fine detail could be captured. It certainly looks very promising, particularly considering independent research found that the Xperia Z1 provided the best overall image quality of all the leading smartphones – something we’re looking forward to putting to the test in our full review.

Xperia Z1 image on the left, iPhone 5 on the right

In support of its seemingly market-leading camera, Sony has produced a new suit of Xperia camera apps to make the most of it. These are:

Social live – This allows you to broadcast straight to Facebook, live from the Xperia Z1, for up to 10 minutes. You’ll receive comments in real time on your screen and even get to see how many of your mates are watching. Once you’re finished, it’ll be saved in your videos.

Info-eye: Take a photo of things to receive more information on it. For example snap a book to get its synopsis, or a landmark to find out its history.

Timeshift burst: Use this mode to take 61 photos in two seconds, a second before and a second after you press the shutter, then scroll back and forth through them to find the one you want.

AR effect: A pretty gimmicky but fun mode of overlaying a range of customisable animations over a real photo, using Sony’s Smart AR augmented reality technology. An SDK has been released to allow developers to create their own too.

While the Sony Xperia Z1 is an interesting proposition in itself, Sony also showcased a number of interesting accessories that will work with it.

First up, the Sony Cyber-shot QX10 and QX100 Smart Lenses – two wireless lenses that bring even more full-camera smarts to the Z1 (or any other Android or iOS phone, for that matter). These lenses connect to your device via wi-fi (and via One-touch NFC with the Z1) and can either attach to your phone using the included mount, or be used completely wirelessly, held in your hand above a crowd, for example. You’ll then be able to view whatever it sees on your smartphone’s screen.

The lenses each have their own shutter button, which means they can be controlled completely independently of your phone, and images can be both saved to your phone automatically, as well as to a microSD inserted into the lens itself. You can even set what resolution to save the photo at, so you don’t fill up your smartphone memory with high-res shots.

The lenses are charged up via micro USB and each one has a battery life of around 220 shots.

Also on show was the Smart Watch 2, originally announced alongside the Sony Xperia Z Ultra, and up for demo for the first time at IFA.

This watch accessory connects to any Android phone via Bluetooth and NFC (although Sony assures us it works best with Xperia phones) and allows you to perform various tasks and view content contained on your phone, on your wrist. This includes making phone calls from your contacts or recent calls list (you’ll need a Bluetooth headset for this), reading emails, checking Facebook and showing off a slideshow of your photos.

It's fully customisable by downloading the Smart Connect app from the Google Play Store, so you can decide what apps to have up for use.

We’re still waiting on UK pricing for the Smart Watch 2, but will bring you an update as soon as we hear.

The Sony Xperia Z1 is already on pre-order with Three now, so expect it to be hitting shelves sometime before Christmas. We’ll bring you our full review very soon.