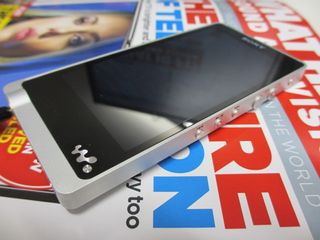 Disclaimer: this hands-on test is based on an early prototype that Sony lent us, and is not intended to be a comment on the final product that was released in Japan at the weekend. We’ll try to get one of those too, but that’s why there’s no star-rating here.

For a lot of people, smartphones have become the default choice for portable music. They’re convenient, after all – not everyone wants to carry multiple devices.

But some of us still want music to go on a dedicated device that places audio playback above all else. That’s where the NW-ZX1 comes in. It’s Sony’s latest flagship Walkman, and is capable of playing high-res music as well as your standard CD-ripped tunes.

To get one thing out of the way, there seems to be a little confusion over the device’s name. The Sony.jp product page calls it the ‘NW-ZX1’, and this is reflected by the label on the back of the unit.

Go into the settings, however, and you’ll see the device thinks it’s called the ‘NWZ-ZX1’. We’ll put this down to manufacturing confusion. ‘ZX1’ seems to be a safe label for now.

The ZX1 makes one hell of a first impression. It’s a solid, weighty unit with a frame machined from a block of aluminium. The front is glass, the back is rubbery leatherette – which looks quite smart and improves grip. The Walkman logo on the back is actually a tiny speaker, and above that is a symbol denoting NFC (Near Field Communication) for easy Bluetooth pairing.

It’s an unusual shape – a thin slab for the most part, but with a prominent derrière. This houses the amplifier block, and also makes the unit easier to handle. It’s encouraging that Sony hasn’t embarked on a relentless pursuit of design in favour of top-quality tech.

In line with this attitude is the bottom edge of the device, which seems proudly asymmetrical. There’s a loop for lanyards (that’s a big deal in Asia), a proprietary charge/data port, and a 3.5mm headphone socket in the middle of a gleaming brass cylinder. This cylinder is so big it rises slightly above the face of the ZX1. This allows internal cabling to be a little thicker, theoretically improving sound quality.

Sony has recognised that touch-screens aren’t everything, and to this end the ZX1 has physical buttons along its right edge. No more turning on the screen to change tracks – you can do that in your pocket. This makes us happy.

Overall, it’s a striking design. Sony has clearly tried its best to make the ZX1 different to anything from Cupertino. By putting function ahead of form, Sony has created a device that looks like it means business, and the luxurious build quality reassures us of that impression.

There’s 128GB of storage on board, with no expandable memory slot – and Sony has not announced plans to release the ZX1 with other capacities. The 4in screen has a resolution of 854 x 480 pixels, which is more than good enough to navigate the device, but we wouldn’t bother watching films on it. Music is very much the priority here.

Audio compatibility is pretty good: MP3, WMA, ATRAC, ATRAC Advanced Lossless, WAV, AAC, HE-AAC, FLAC, Apple Lossless and AIFF formats are all supported. File transfer is a simple matter of dragging and dropping, without the need to faff about with a particular program. Lovely.

The ZX1 runs on Android 4.1 Jelly Bean. A proprietary Sony Walkman interface would have been more interesting, but at least this means we’re on predictably safe ground. The default Sony Walkman app has a nice interface and quite a few equaliser modes to play with, but if you’d rather use third-party software such as Poweramp, the Walkman’s Google Play store access will see you right. (It means you can play Angry Birds too.)

This being a high-resolution music player, we didn’t waste any time in loading a selection of tracks up to 24-bit/192kHz. And the ZX1 sounds great, delivering a refined performance with plenty of subtlety. Details and textures are layered and well organised on a wide-open soundstage.

You get a high level of precision and agility, with excellent timing and punchy dynamics. Tonally the sound is well balanced, but the articulate yet hard-hitting bass deserves a special mention. We switched to WAV CD-rips of the same songs and noticed a minor dip in detail and subtlety, but not enough to dampen our enjoyment of the performance. These tracks benefit from the same polished, engaging presentation as their high-res FLAC counterparts.

Even with an early, non-production model, we like what we saw and heard of the ZX1. The build and design are lovely, and the audio performance is deeply impressive. If the finished model is anything like this, those in Japan are in for a treat.

Sadly, there’s no word on a release date outside the country, where it costs 74,800 yen (about £480). Hopefully this will change soon, and when it does we’ll be sure to give it a full review right here on whathifi.com.

See also: High-resolution audio – everything you need to know