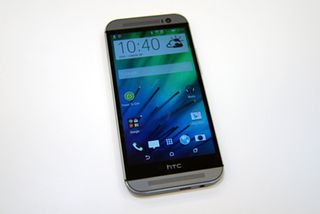 The HTC One was one of our favourite phones of last year, and we weren’t alone. It received five star reviews from just about every tech mag, blog and website the world over, winning people over with its gorgeous aluminium design and flawless performance. No pressure for its successor, then…

The HTC One M8 is that successor. It might seem like a strange choice of name, but the original HTC One was codenamed M7 (the ‘M’ standing for metal, by the way), and will be rebranded as such. Yes, you’ll still be able to get the original One once the M8 is on the market.

Certainly on paper, the One M8 looks to be the successor we’d all hoped for, but you can never judge a phone by its spec sheet alone. We got hands on with it at a pre-launch event to bring you our first impressions.

HTC knows how much the One (M7) was loved for its design, and the One M8 feels more premium than ever. Its body is now around 90% metal, up from 70% on the original, and it shows.

It feels more than ever like a single piece of aluminium, with next to no plastic on show at all. The pictures below show it next to its predecessor (HTC One M8 is on the left).

The design has been tweaked slightly too, with more curved corners than previously, and a gorgeously rounded back panel that has been tapered at the edges to make it easier to hold. It also makes it feel slimmer, despite staying the same depth at 9.3mm.

It’s another attention to detail that makes this phone both look and feel every bit the flagship phone it’s supposed to be.

HTC has boosted the screen on the One M8 from 4.7in to 5in, and while the body has had to become a little bigger to accommodate it, it’s actually not too much of a jump thanks to a slimmer bezel.

It’s a 1920 x 1080 full HD screen with a pixel density of 441ppi. That’s a slight drop from the One (M7), which offers 468ppi, but we’d guess you’d never notice the difference. The screen is gorgeously sharp, with a vibrant colour palette and not a pixel in sight.

Its use of similar panel technology to an IPS (in-plane switching) display means viewing angles are really good, and manage to hold onto colour vibrancy and deep blacks even when viewed off axis. We’ll be putting this through more rigorous testing in our full review.

From our short time with the HTC One M8, we’ve been pretty impressed with its performance.

We tried our best to fluster it, running multiple apps, whizzing around the operating system and opening numerous data heavy web pages, but it kept up without a single stutter or stumble.

This is in no small part down to the new processor, a 2.3GHz Qualcomm Snapdragon 801 chip, supported by 2GB of RAM.

It’s not the most up to date processor, with the Samsung Galaxy S5 bragging the Snapdragon 805, but we can’t imagine anyone feeling like the One M8 is ever keeping them waiting.

There’s a single storage option in the UK, and it’s a rather paltry 16GB, but content junkies needn’t fret. There’s a microSD card slot that’ll allow you to boost your memory by a whopping 128GB, plus some free Google Drive cloud storage too.

Elsewhere on the spec sheet, there’s a large 2600mAh battery, a jump up from the One (M7’s) 2300mAh battery, which is supported by an ultra power saving mode. This means if you’re really low on juice, you can switch it on and you’ll get 30 hours of standby time at 10% - though you will of course lose a large chunk of functionality in the process.

As for connectivity, the HTC One M8 supports 4G, offers wi-fi 802.11 a/b/g/n/ac, packs NFC and is capable of aptX Bluetooth. You’ll also be able to control your TV via the IR blaster on the top edge of the phone.

The HTC One M8 comes packing the newest version of HTC Sense, Sense 6.0. It’s still as lovely looking as ever, keeping things simple with a clean look and design and very little bloatware.

A lot of the work has been around Blinkfeed, HTC’s content aggregating homepage. It looks better, scrolls smoother and you are now able to create ‘Bundles’ – a single tile that bundles together all the news on a certain topic so it’s easier to keep up.

Adding sources and customising your Blinkfeed is easier than ever too, plus the ability to add in RSS feeds, first seen on the HTC One Max, remains, so you really can make it into a snapshot of all the things you care about.

We loved Blinkfeed on the original One, and it’s now even better.

A new feature on the One M8 is Motion Launch, and a bit like the LG G2, it enables you to double tap on the screen to wake the phone up. There are also a handful of other gestures, such as swipe left to launch Blinkfeed, swipe right to get straight to your homepage and swipe up to go to your last used app. You can also hold the volume key and turn the One M8 on its side to launch the camera.

We tested these out during our time with it and they all worked perfectly. It’s just another nice touch that makes the One M8 feel as though it’s really working for you, and if they’re anything like the gestures on the G2, they’ll become second nature before you even realise. Though if you have a passcode, you will of course have to enter that first.

We were big fans of the sound on the original One, and HTC has not been resting on its laurels. The Boomsound stereo speakers that sit above and below the screen have had their speaker chambers redesigned, so they are now 25% louder than on the previous One.

There’s also a redesigned ‘multi-phase’ amp, which allows the One M8 to amplify different parts of a track independently, giving it the ability to boost soft vocals without overdoing the bass, for example.

We took a quick listen to the One M8 against its predecessor and there is an obvious difference. The sound is bigger and more spacious, voices are clearer and there’s no hint of it being harsh or brash in the top end.

It’s a really convincing performance, but using headphones will ultimately bring the refinement and detail that we crave from our music and movies.

Finally, this is the first phone in which HTC has replaced Beats Audio with its own Boomsound setting. It ultimately aims to do the same thing, giving a bit of a volume boost when wearing headphones, and piling a bit more weight into the low end. We’ll bring you more on this in our full review, to see how it compares.

One of the big talking points of the HTC One was its camera’s use of Ultrapixels – bigger than standard megapixels, which claimed to catch more light for an improved low light performance.

The same 4.1 Ultrapixel lens returns here, slightly tweaked to produce less noise, and joined by a second camera, the pair combined being referred to as the “Duo Camera”.

While the main camera is capturing the photo, the second lens is capturing all the depth information of the shot, allowing you to adjust the focus of the photo after the fact.

We’ve heard a few manufacturers adding this into their phones recently, but this is the only one where there’s a separate camera capturing this information for every shot – no special mode need be selected.

We got some mixed results from our test shots though, so we’re looking forward to putting it more through its paces in our full review.

As for regular photos, the HTC One M8 looks promising. Our short time with it produced sharp, well-balanced shots, with a gorgeously realistic colour palette. There’s a new multitone flash too, which aims to create a more natural result, particularly with skintones, and a 5MP front facing snapper too.

We’re pretty taken by the HTC One M8. It’s not been overly radical in its transformation, but it has taken all of the important bits from the predecessor, worked on them and made them better, creating a superb first impression. I

It's going to be a busy few months in the smartphone sector, with plenty of fresh competition on its way to challenge it, but we’ve got no doubt the HTC One M8 will put up a good fight, and then some.

MORE: HTC One M8 prices and where to buy