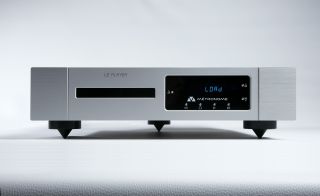 Back in 2016 we advised you to make room on your shelf for the "terrific" Metronome Le Player – the French high-end audio maker's entry-level CD player (it still wasn't cheap). Now, the company has officially launched the third generation Le Player 3  – but will it be a case of déjà vu?

The Le Player 3 (£4,698) certainly has a certain je ne sais quoi. It extracts maximum detail from every recording by upsampling 44.1kHz CD data to DSD128, while frequencies above 192kHz are sent to the Le Player's integrated I2S HDMI output.

This is because there's no built-in DAC. Metronome says it's less limiting, as it means music lovers can use their preferred DAC to make the most of the high-quality sound reproduction offered by CDs.

The design is classic – Metronome bills the Le Player 3 as 'affordable perfection' – and nowhere near as extravagant as some of the company's pricier gear. A slot-loading mechanism replaces the top-loader that graced the first generation, but the sleek aluminium-clad finish remains intact.

Round the back, there are digital connections galore: PCM 44.1 to 384 kHz and DSD64, an S/PDIF RCA connector, an AES/EBU XLR connector, optical Toslink, plus that HDMI 12S. You also get a hefty power supply that comprises three toroidal transformers.

Given that many of Metronome's flagship products cost ten times as much as a Le Player 3, this 'entry-level' CD transport could prove to be another high-performance bargain. Tempted? Le Player 3 is available in the UK via high-end distributor Absolute Sounds, priced at £4,698 (Australian pricing and availability is yet to be announced). Everything is relative...