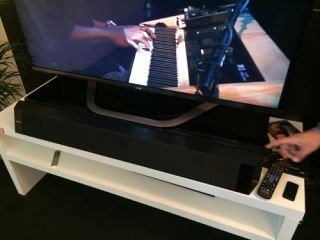 It's common knowledge that most flatscreen TVs sound rubbish. And that not everyone can accommodate a full 5.1 rig in their home. So the soundbar has proved immensely popular, and more recently has morphed into the soundbase that sits under your telly.

French speaker company Focal has combined the best of both worlds here at CES by developing the Dimension soundbar and sub.

The stylish soundbar itself is less than 6.5cm deep so can be placed in front of the TV or fixed on a wall. It incorporates five patented ultra-flat speaker drivers covering a very wide bandwidth for optimum performance.

And here's the clever part: if you want to boost the sound even further, the optional subwoofer is designed in the shape of a soundbase to sit under your TV, with the soundbar in front. We think it's a rather smart solution, which is why we gave the Focal Dimension a Stars of CES 2014 award.