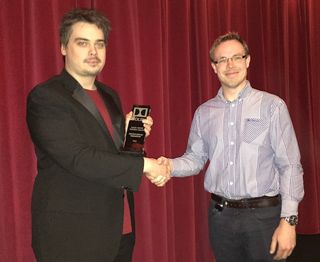 At whathifi.com we spend a lot of time assessing the sound quality of audio and video products. Of course, sound quality is dictated, in the first instance, by the quality of the recording and mastering (in the case of music) and by the way the sound has been designed and engineered (in the case of surround-sound movie soundtracks). The art of sound design is intrinsic to our enjoyment of film sound, and without effective sound design we won't hear just what clever and expensive electronics are capable of.

Heard in pin-sharp surround sound, Juhasz’s audio design is a dynamic, high-intensity affair with convincing effects steering and is rich in detail. It beat six other entries on the night. Juhasz, who is the only UK university student to be offered an Intel internship in Silicon Valley this year, said “it’s a huge honour for me to be recognised by a company like Dolby.”

The Award was presented by Dolby Senior Sound Consultant (and member of this year’s judging panel) James Shannon. He said: “We’re extremely proud to be collaborating with the NFTS to recognise new and exciting talent in the world of sound for film and TV. This Award is a fantastic showcase for how sound can be used to transform the art of storytelling.”

The NFTS is a registered charity than has produced numerous highly successful graduates in its four decades. Oscar winner Nick Park (of Aardman Animation and Wallace & Gromit fame), David Yates (BAFTA-winning director of Harry Potter) and cinematographer Roger Deakins (12 times nominated for an Academy Award but, inexplicably, yet to win one) are among the most famous names. In total, NFTS alumni have won seven Oscars and more than 100 BAFTAs.