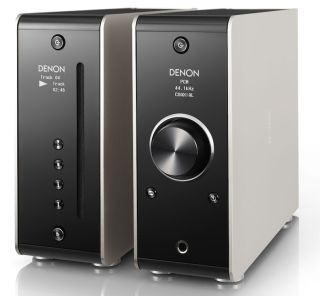 Denon says the two units can be positioned either vertically or horizontally and there is a direct coaxial digital connection between the two. The PMA-50 amplifier includes advanced AL32 processing and a DAC master clock design.

For those wishing to pair the DCD-50 with other amps, it has a 32-bit/192kHz DAC (digital-to-analogue converter) for connection to any standard amplifer with RCA analogue input.

A slot-loading CD drive can play regular CDs as well as those with MP3/WMA files on them, and there's aptX Bluetooth as standard for streaming music wireless from portable devices. Music lovers can also listen to high-resolution 24-bit/192kHz audio and play back PCM and DSD (Direct Stream Digital) tracks on their PC or Mac via the Denon PMA-50's USB-B connection.

The amp delivers a claimed 50W into 4ohms and has two optical, one coaxial and one USB-B input. There's also a subwoofer preout, a headphone output with gain control, NFC (Near Field Communication) compatibility and a system remote control.

Also unveiled was the DRA-100 network amplifier, offering 70W per channel into 4ohms.

Boasting the same sleek aluminium design as the rest of the range, the DRA-100 offers high-res audio streaming support up to 24-bit 192kHz PCM and DSD 2.8/5.6MHz, as well as internet radio, Bluetooth connectivity with NFC and built-in Spotify Connect.

Physical connections are covered off by a front-mounted USB-A port with support for high-res audio, two optical inputs, a coaxial in and three analogue ins. There is also a pre-out (fix and variable level switchable) and a front-mounted headphone jack to allow you to use it as a headphone amp.