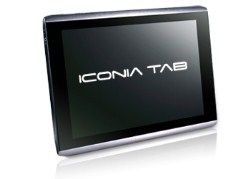 Acer has kick-started what's sure to be another avalanche of tablets at this year's CES with a sneak peek of a 1080p-touting Iconia Tab.

The company's tablet range is set to be boosted by the 'mystery' Quad Core tablet with a 1080p resolution screen in Q2 of this year.

While Acer's press conference here at CES in Las Vegas was dominated by new ultrabooks and the company's AcerCloud storage service, more interesting to us was a 10-second glimpse of a new Iconia Tab.

Acer didn't officially announce the tablet's name but we had a quick scout at the tablet's internal settings where it was clearly labelled as the A700, with a Quad Core processor and that 1920x1080 screen resolution.

More details on this tablet as and when we get it. We're sure it's set to be joined by many more over the next few days here at CES.