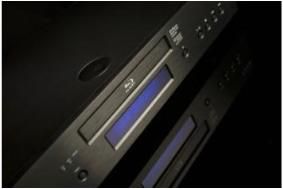 We brought you news of the network media player yesterday and now we can reveal it will be joined by a 3D Blu-ray player and a digital iPod dock.

The 751BD 3D Blu-ray player comes hot-on-the-heels of the company's first BD player, the 650BD, while the iD100 takes a digital signal from an iPod, iPhone or iPad.

Cambridge Audio, a brand synonomous with quality British hi-fi is bullish about its audio performance in particular, claiming the 751BD to be 'the best sounding 3D Blu-ray player yet'.

Five Wolfson WM8740 24/192kHz DACs will have no small part to play in that, helped by a carefully thought out circuitry layout for maximum performance.

There's support for DVD-Audio and SACD, comes supplied with a wireless dongle for connecting to a network, has a 1GB internal storage and two USB connections for adding more.

Interestingly there are also two HDMI outputs, allowing you to send 3D video to multiple displays - a projector and a TV, for example.

It's joined by the company's first digital dock for iPod, iPhone and iPad, the iD100, which aims to be the most technologically advanced dock yet.

Available in silver or black and constructed from aluminium, the iD100 takes a digital signal from your portable and offers balanced XLR and digital optical outputs.

Component, composite and s-video connections allow you to send video to a display, too, while a USB connection allows for syncing with iTunes.

There's support - and room - for all Apple devices, including the iPad, and is Made for iPhone certified.

Supporting all Apple-supported audio formats, including lossless files, the iD100 is due out in Spring and will retail for £150.

We'll be bringing you all the news as it breaks directly from the world's biggest consumer electronics show, CES 2011 in Las Vegas.