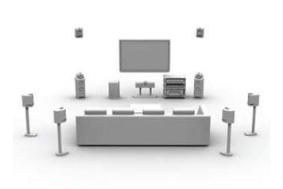 The company explains: "Through the addition of a pair of speakers above the front left and right speakers, Dolby ProLogic IIz introduces a vertical component to the horizontal sound field of a conventional 5.1- or 7.1-channel surround sound system"

"The enhanced spatial effects bring an overall airiness to the listening experience, a new dimension of presence and depth," Dolby adds.

Making movies extra scary
Dolby is demonstrating ProLogic IIx taking non-directional elements of a movie soundtrack - rain and wind, for example - and pumping them through those extra two front speakers to create extra ambience. It's highly effective in conveying the atmosphere of a movie - creepy horror-film moments particularly!

Future applications are expected to include specifically mixed soundtracks for gaming.

It's not a new concept, of course - higher-end receivers have used their own processing modes to allow for front presence speakers for several years now (Yamaha's DSP-Z9 being a notable example).

However, Dolby ProLogic IIz makes the processing available to a wide range of receiver manufacturers, to add to products at a range of price-points.

Indeed, the first receiver to feature ProLogic IIz will be Onkyo's forthcoming TX-SR607 - the replacement for the hugely popular £400 Onkyo TX-SR606. Onkyo's new range is due in the summer (and we'll bring you video footage of the TX-SR607 in our CES report).