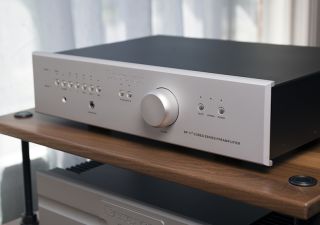 This new Bryston pre-amplifier incorporates Salomie input circuitry – named through its development with the late Ph.D. engineer Dr. Ioan Alexandru Salomie – which can be found in the company’s Cubed Series power amplifiers, and is designed to greatly reduce noise and distortion.

Bryston also claims the BP-17³'s engineers have also been able to reduce the effect of radio frequency interference on the signal.

One of the XLRs is switchable between variable and fixed for easy connection to a balanced input headphone amplifier such as the Bryston BHA-1, and connectivity can be further expanded with the addition of a high-res audio-capable internal DAC and/or a moving magnet phono stage (at $750 each).

The standalone BP-17³, which comes in a black or silver finish, will be available in September for $3995. Any orders received by 31st August will qualify for a free accessory module: a phono stage, internal DAC or BR-2 remote control.