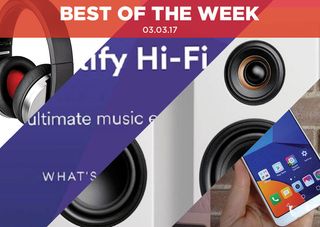 This week it emerged that Spotify could be teasing a new lossless streaming option, Huawei is releasing two hi-res audio compatible phones and Denon and Marantz has been bought by a US venture capitalist firm.

Some Spotify users in the US have noticed they could access Spotify Hi-Fi, a new lossless music service from the streaming giant.

The quoted price is an extra $7.50 on top of $10 already paid, which is lower than Qobuz or Tidal's pricing.

Spotify responded by saying it had "no news to share at this time".

Huawei has announced two new smartphones, both of which will come with hi-res audio compatibility.

The P10 and P10 Plus have support for 24-bit/192kHz audio, which should be a bonus for music aficionados.

The handsets are expected to go on sale in the UK in April.

READ MORE: Huawei P10 and P10 Plus are built to handle hi-res audio

Denon and Marantz bought by US private equity firm

D+M, previously known as Denon and Marantz, has been sold to a US private equity firm.

The new owner is Sound United, which also counts Definitive Technology and Polk Audio as part of its portfolio.

Early talk about the future of both brands has leaned towards expanding product lines, so could we expect some new products shortly?

B&O Play has a new wireless speaker, the Beolit 17

Yamaha MusicCast to get Alexa voice-control function this autumn

Wheel by Miniot - the most minimalist turntable ever?

The best new phones and tablets from MWC 2017

The best new speakers from the Bristol Show 2017

Focal has a good reputation for delivering quality products and these headphones do not let the side down.

The Listens boast an organised and spacious soundfield that's rich in bass and smooth on the treble, making for a comfortable listen.

The lack a certain amount of clarity and enthusiasm, but for a portable pair of on-ears, they're a smart choice.

Triangle is back with a powered speaker effort and it's a satisfying option for anyone looking for a convenient hi-fi solution.

The Elaras are versatile speakers that work well with most sources. The sound is sturdy, lively and upfront, though bass can be overstated and it's not the most precise or subtle either.

Despite that, they're a fine option if you're looking to save space.

If you're on a tight budget, these Jabras are a good option.

Reasonably comfortable with a stable wireless connection, they have a balanced sound that handles both treble and detail well.

At this price you'll be pleasantly surprised by the performance they offer.