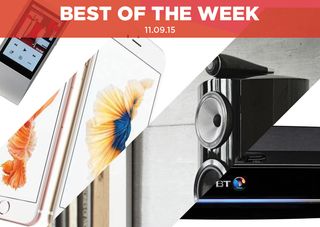 This week Apple announced the launch of not just a new set of iPhones, but a new iPad and a revised Apple TV. B&W took the wraps off the its latest 800 Series of Diamond loudspeakers and Pioneer launched the first ever MQA ready hi-res music player.

On the reviews side there's plenty to get worked up about with Samsung's UE48JU7000 TV, BT's Ultra HD YouView box and Astell & Kern's AK Jr music player coming under our scrutiny.

MORE: A brief history of the Apple iPhone

Apple launches iPhone 6S, iPhone 6S Plus: "Most advanced phones in the world"

It was a week in which Apple dominated as it announced a number of new products at a launch event in California.

New iPhones will be hitting the market with Apple claiming that the iPhone 6S and 6S Plus are the 'most advanced phones in the world'.

A new fourth-generation Apple TV box with a focus towards gaming was announced, along with a bigger version of the iPad Pro, which to us sounds a lot like Microsoft's Surface 2 tablet/laptop hybrid.

B&W has unveiled its 800 Series Diamond speakers, the culmination of seven years of research, resulting in the company's most technologically advanced speakers.

The range, with the exception of the D300 floorstander, is due to go on sale in October for anyone who has extremely deep pockets.

Pioneer has stepped in to the hi-res music player market with the world's first ever MQA-ready player.

A touchscreen device with a 4.7in Full HD screen, the XDP-100R allows users to download services such as Spotify, Tidal and Qobuz with file formats covering everything from low-res files to DSD.

The XDP-100R is due to go on sale sometime in October. Pricing is yet to be confirmed.

LG wants to sell an OLED TV every minute

Easy-to-use and with a brilliant level of contrast and definition, Samsung has yet again hit a high note with its UE48JU7000 4K TV.

It razzle dazzles with 4K content, but doesn't skimp with 1080p either, with good colours and contrast to go along with the detail.

A strong all-rounder - for the price you're getting a very commendable TV.

While there's not a lot of 4K content out there, this set-top box from BT is sure to increase it and from what we've seen it could be worth the step up.

4K simply looks jaw dropping, with BT's own Ultra HD sport channel exploiting the level of detail and clarity the format affords. It's incredibly good, although the HD performance could be improved.

Still there's not a lot of 4K content out there, and the price for so little content looks steep. In that respect, it will hopefully improve but if you're in the Venn diagram of being a) a football fan, and b) have BT Infinity, this Ultra HD box could be worth the admission.

The one thing that's been keeping hi-res players out of consumers' hands is probably affordability. Astell & Kern's AK Jr goes some way to alleviating that problem.

It looks great in a minimalist way and the sound is assertive, drawing your attention with a sound that refuses to be meek.

So while £400 is still above the average you'd pay for a standard music player, it's otherwise hard to find fault with the AK Jr. Buy and enjoy.