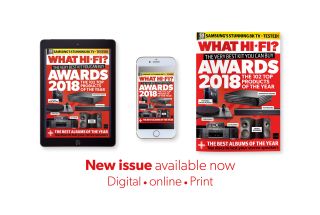 It has been another great year in the world of hi-fi. Televisions got even bigger and better, as 4K broadcasts became a reality. And to top it off, the first commercially available 8K TV set appeared towards the end of the year.

Wireless speakers keep on advancing too, with voice-activated assistants meaning these clever little devices can both play your favourite tunes and turn up the heating in your home.

Elsewhere, there was a constant flow of superb hi-fi kit throughout 2018, from turntables to smartphones, DACs to phono stages, and AV amplifiers to speaker cables… all worthy of a mention.

At this time every year, the What Hi-Fi? review team decides on their favourite kit in each category. We have already named 102 Best Buys – each a winner at its own particular price – but we’ve saved the best until last.

In our special Awards 2018 issue, we reveal which products have been crowned Product of the Year. This is our pick of the very best hi-fi kit of 2018, and with recommendations for all product categories and at all price levels, there’s something for you, whatever your budget.

For the past few weeks, our review team has been hard at work coming up with lists of Awards winners in each category – the result was our list of 102 Best Buys, released a few weeks in advance of the Awards ceremony.

Saving the best until last, our Products of the Year remained a well-kept secret, until they were announced at an Awards ceremony at the Marriott Hotel in central London last night.

You can read all about them in the Awards 2018 issue of What Hi-Fi?. From superb soundbars to terrific turntables, all our favourite kit is listed in this 164-page special issue.

Stuck for ideas for your Christmas list? Grab a copy of the special What Hi-Fi? Awards 2018 issue to find out which items won our Product of the Year.

The range of speakers and price points makes this one of the most hotly-contested Awards categories.

Our review team had many great standmounters to choose from, including the Dali Spektor 2s, Monitor Audio Bronze 2s, Mission QX-2s, KEF Q350s, Revel Concerta2 M16s and the Dynaudio Special Forties – all of which won Best Buy Awards. But the overall winner of the Product of the Year went to the KEF R3s.

In the floorstanders category, relative newcomers Fyne Audio walked off with two Best Buy Awards for its F302 and F501 speakers, while the Dali Oberon 5s, ProAc Response DT8s and Spendor A7s were also commended.

It has been a year of innovation in television, as intense competition between the big four manufacturers drives standards – and screen sizes – ever higher.

When it comes to hi-fi, a good pair of headphones is essential, and for the What Hi-Fi? Awards, we had plenty of great ones to choose from.

There were several winners across the different categories, including the Sony WH-1000XM3s, which took the Product of the Year Award and the Best wireless headphones over £300 category.

In the on-ears category, AKG’s Y50s won the Best portable on-ear headphones under £100 and made it a double success by taking the Product of the Year too.

But, while we celebrate a year of amazing hi-fi kit, the products just keep on coming. In the First Tests section of the 2018 Awards issue, we also review the first commercially available 8K television, the Samsung QEQ900R.

Thinking about bypassing 4K and making the leap to 8K? Read our verdict on whether this 8K Samsung is a game-changer. But if diving straight into 8K isn’t your thing, we also review Sony’s smaller KD-43XF8505 television.

We also have three pairs of speakers on review, the Wharfedale D320s, Q Acoustics 3050i and the KEF R3s. Which of these pairs will bring you the best sound-per-pound performance?

Also on review are the Yamaha RX-A1080 amplifier and Sony’s WH-1000XM3 headphones, while we complete our First Tests line-up with Epson’s EH-TW650 projector and the NAD C538. CD players may be rare visitors to our testing rooms these days, but we describe this one as being “worthy of serious consideration”.

Read our feature on six of the best albums of 2018 to test your speakers. These are the albums we listened to while testing all the Award-winning kit, so if anything will make your system sing, it’s these.

Plus: Don’t miss our special offer – a free pair of SoundMagic E10C headphones (worth £40) – when you subscribe to What Hi-Fi?

With so much great hi-fi kit on review, the Awards 2018 issue is not to be missed. So grab a copy of What Hi-Fi? from your local newsagents today. Or simply download it onto your tablet or smartphone. Enjoy!