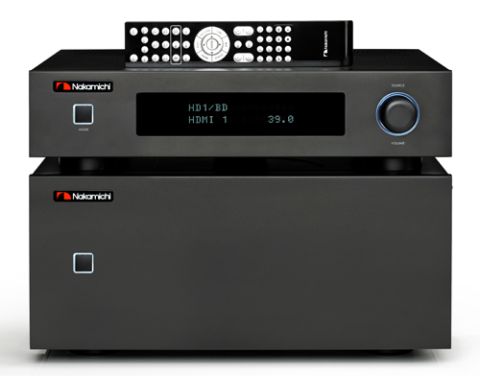 It has its strengths, but this pairing has too many flaws to compete with the best

Mention the name Nakamichi and we bet most audiophiles still associate the brand with exquisite high-end cassette decks. Yet decks like the legendary Dragon went out of production decades ago.

Over the years the brand has gone through various management changes and its product mix has changed radically.

The last time we remember reviewing anything from Nakamichi, it was an all-in-one style system built to battle Bose.

But that was years ago, so imagine our surprise to be confronted by this – the AV1/AVP1 processor/power amp combination.

On the surface, this pairing seems almost too good to be true. It’s smart, easy to use and finished to a high standard.

So high that we couldn’t believe the company could sell the combination at £900. We’d have guessed a figure at least double that.

Checking the specifications, though, you'll find a few omissions. There’s no network streaming ability or internet tuner (due imminently), and the AV1 processor won’t pass through a 4K signal.

While 4K is in its infancy we would expect most receivers to accommodate such a signal. Nakamichi plans to launch a suitable video scaler in due course, but there are no firm dates.

Oddly, there are no analogue video inputs either. These are no longer essential for many, but it’s still a surprise omission.

The AVP1 power amplifier is a real powerhouse, delivering 7 x 110 watts. It’s a chunky unit, weighing in at 32kg, so get help if you ever need to move it.

Even when pushed hard, it doesn’t get too warm. But it’s still worth making sure you leave enough room around it for air to circulate.

Apart from the misgivings mentioned, overall connectivity is good. There’s a decent range of analogue and digital audio connections, and the ability to output stereo signals to three additional zones.

An aptX Bluetooth dongle is supplied, which opens up the processor to use with smart phones, computers and tablets. Handy.

The units can be connected via single-ended or balanced leads. Most of our listening was done using balanced.

Getting started is straightforward. There’s the usual automated speaker set-up – it adjusts size, distance and level, but does it with a fair bit of fuss. Once done, though, the results are accurate enough.

The rest of the set-up menus are a touch basic, showing few of the flourishes the likes of Yamaha or Denon manage – but they do get the job done.

Much the same can be said of the remote handset. It looks smart enough, but isn’t particularly luxurious.

This Nakamichi combination sounds a little crude at initial switch-on. We leave it running for a few days before judging it seriously.

The extra time helps noticeably, with the presentation gaining refinement and losing its hard edge.

We start off with The Hobbit: The Desolation of Smaug on Blu-ray and are impressed with the solidity and power. It sounds really authoritative and delivers high volumes with impressive ease.

The sound field is pleasing too. It may not be the most expansive, but it remains convincing as the dragon thumps around.

Nakamichi has got the tonal balance pretty much right too – enough to make speaker matching relatively painless.

It’s not all good news though. There are a number of areas where this package falls short of the best at this level. Detail resolution is decent but no more.

There are nuances in voices and textures to the instrumental back-drop that the Nakamichi overlooks. Crashes aren’t delivered with a great deal of conviction either, pointing to restricted dynamics and a general lack of agility.

Moving on to the Blu-ray of Stevie Wonder’s Live At Last, the amp struggles to take a firm grasp of rhythms, leading to a slightly ponderous feel to songs.

There’s plenty of solidity behind basslines and the ability to raise replay levels close to that of the real event, yet we’re still missing a chunk of atmosphere and enjoyment.

Stereo performance mirrors that heard in a surround set-up. It has lots of muscle and balanced tonality, but could do with an extra dose of finesse and rhythmic ability.

Ultimately, for all its authority, this Nakamichi pairing doesn’t entertain as much as the best.

It needs greater insight and more expressive dynamics before it can worry the class leaders.