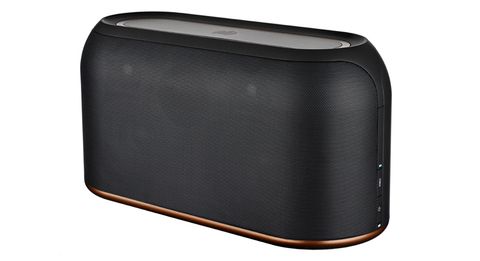 The Audio L Plus is a dance-friendly wireless speaker that will suit Ministry fans; it just lacks the subtlety and detail to be a worthy all-rounder

Toast doesn't ordinarily spring to mind when you mention Ministry of Sound, but there is something decidedly toaster-like about the Audio L Plus.

Alas, it is not a suave kitchen appliance but a wireless speaker, the grown up member of the company's multi-room family.

Certainly its armoury is quite sufficient to fill its role. Behind its curving grille are two 2.5cm tweeters, a pair of 11.5cm woofers and a reflex port for added oomph in the low end.

It is suitably connected, as well: wi-fi, Bluetooth with NFC pairing, DLNA, 3.5mm auxiliary jack and Spotify Connect, as well as access to Ministry of Sound Radio and its Live From The Club feed.

Lifting it from its box, the Audio L Plus is true to the quality we recognise from Ministry of Sound: a reasonably solid plastic casing, metal grill and a touch-sensitive tap-and-swipe control centre on its crown, which doesn't always benefit our clumsy fingers but feels befitting of a fairly high-ticket wireless speaker.

Having acquainted it with our network via the free control app, we are ready to play within five minutes.

If you've heard a similar Ministry of Sound speaker before, you'll probably find the Audio L Plus entirely familiar, and quite right too. It’s the mark of a company that knows its audience.

We begin by playing Public Service Broadcasting's The Race For Space, and are greeted with a smooth but bold midrange, throwing forward John F Kennedy's speech that opens the album as an indicator of its priority for highlighting melody and hooks.

While that emphasis continues, it isn't really until the third track Gagarin that we get our first proper taste of that sinewy punch.

The track's energy plays straight into the Audio L Plus's hands, allowing it to throw its weight around and drive on with conviction. It isn't quite the dance music you may associate with Ministry of Sound, but highlights particularly well the impetus its products are so often able to groove.

There is a lot of bruising bass weight here, but Ministry of Sound appears to have been careful in not letting it become incessant.

It is always at hand to keep more placid tracks such as The Other Side awake, but is able to rein in its enthusiasm a little so as not to misinterpret the character of the music.

It isn't all rosy, however. While throwing forward the mid-range brings melody to the fore, the rest of the Audio L Plus's soundstage lacks insight.

There is relatively little detail beneath the main tune, and that – coupled with a shortage of dynamic range – leaves the overall sound feeling just a little cold, even though it is rather exciting.

Even with the more energetic tracks we play – by a range of artists from Beck to Blind Faith – are well driven but not particularly expressive.

We understand why Ministry of Sound's focus is on what it is – the two free tickets to its London club are a giveaway as to the target audience – but, pitted against competitors from the likes of Sonos, Bluesound and Libratone who are more balanced all-rounders, it loses them some ground.

Given the Audio L Plus's strengths, some extra care with detail and dynamics could make for an extremely engaging and electric listen.

But even though it lacks these characteristics, this remains a worthwhile investment for those who want a multi-room system with added kick.

See all our Ministry of Sound reviews