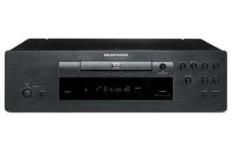 Similar to the Denon DVD-3800BD in most ways and slightly superior with music, but the Marantz isn’t quite the complete machine

While the Marantz's cardboard box looks different on the outside, inside the packaging is identical, and even though the cover of the manual looks different, it shares similar dimensions and has exactly the same number of pages (41, just in case you're interested).

Yes, the front aluminium panels look different, but the loading drawer, buttons and SD card slot are in exactly the same position.

Familiarity breeds contentment?
Connectivity mirrors the Denon DVD-3800BD too – the Marantz has a single HDMI output and two sets of component video outputs (one standard RCA connectors, the other BNC). On the rear panel, there's also a set of multichannel analogue outputs and a pair of dedicated stereo outputs.

Is there anything different under the bonnet you might ask? Well, after numerous phone calls and e-mails we weren't able to nail down a definitive answer. However, looking at the specifications of the Marantz BD8002 and picture quality, we haven't seen anything to discourage the belief that these D&M siblings share numerous similarities.

Switching from the Vietnamese jungles of the Tropic Thunder Blu-ray to the vibrant Hawaiian attire of the cast of Forgetting Sarah Marshall, colours boast the same sense of richness and vitality.

Overall, detail levels are on a par with the Denon '3800BD, as are contrast and the player's confidence in handling the fast motion and slow panning scenes of Australia. As Drover and Lady Sarah Marshall make a last minute dash to get her cattle to the docks, the picture remains focused and firm.

This stability is there with tougher tests as well – it is maintained despite the flurry of four legged beasts careering down the middle of Darwin. The player works well as a DVD upscaler, but there are other players on test here, such as the Pioneer on the following page that present clearer, better-defined images.

Sonically, there are differences between these two players, suggesting each has been individually tuned. The BD8002 sounds more expressive and dynamic. This can be heard when the player attempts to balance Australia's dramatic dialogue and musical score.

Bass sounds a little overblown, but the BD8002 gives you greater bang for your buck. With CDs, the Marantz sounds richer, smoother and more dynamically expressive than the Denon player.

The Marantz is a good player, but when you take overall performance and price into account, there are other players that present a more convincing case.