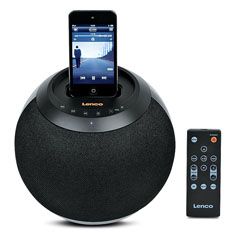 Fine if you’re looking for an objet over sound quality, but there’s better for the cash

We’re used to seeing iPods sprouting from rectangles and ovals, but plonking our player on top of a sphere is a novel one.

The Lenco Speakerball is a kid’s football-sized affair with the dock on top, a mini USB socket for connecting to a PC and using iTunes, an AC adaptor jack (no battery) and a 3.5mm output. The remote control is a standard plastic job.

Would be fine as a kitchen option
So far so good. And the sound? That’s where things fall apart a bit. It isn’t offensive – there’s just nothing special about it.

Involved instrumentation, such as that heard on Aerosmith’s Eat The Rich
sounded a little cluttered, especially when we pushed the volume, while El
Ten Eleven’s simpler Marriage Is The New Going Steady fared better, with better separation between parts.

We opted for a flat EQ (the controls seem to do more harm than good), which improved things – but unless your iPod contains 14,000 repeats of Fast Car by Tracey Chapman, the Speakerball is just that little bit cluttered for serious listening.

For an easy listen in the kitchen, though, this would be a passable choice.