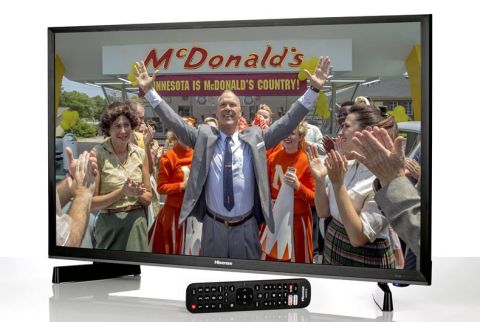 “Though she be but little, she is fierce”; this oft-quoted phrase from William Shakespeare’s A Midsummer Night’s Dream is a good description not only of Hermia, but also of the Hisense M2600.

On the back of the 32M2600, you’ll find three HDMI inputs, a USB port, and a coaxial cable for broadcast television. There’s also an Ethernet connection there, in case your wireless network isn’t reliable.

There’s also the option, in the Sound settings, to adjust the sound equaliser settings - targeting specific frequency points rather than giving you the usual overview of genres (Movie, Sport, etc), which can help you get your audio balanced just right.

Since this is a Smart TV, there are a number of streaming services available too, found under the ‘Premium’ section of the Inputs menu.

These include Netflix, BBC iPlayer, Wuaki and YouTube, as well as Deezer music streaming. However, Amazon Prime is notably absent, as are the other catch-up services from ITV, Channel 4, and Channel 5.

In theory, you could bypass this issue by using the Anyview Cast function, which uses your WiFi connection to mirror content from your mobile device to your Hisense TV.

Unfortunately, iPhone users are out of luck as this service is only compatible with Android devices - and even that’s only to a select few, as it wouldn’t allow us to stream content from our Galaxy Tab 2 to the television.

If you're looking to get content from your phone to the screen, we’d recommend investing in a Chromecast dongle or Amazon Fire TV Stick instead.

But if you’re happy with just the standard streaming apps, then you’ll appreciate the dedicated buttons on the remote for them - as well as the general feel and design of the remote as a whole.

The buttons are sturdy and navigation keys have a comfortable click when pressed.

We set up the Hisense using a trusty THX disc, adjusting the brightness and contrast for the light levels of our testing room.

It’s worth putting the Adaptive Contrast mode on ‘low’, as well, which just helps balance out the darker areas for a more detailed image.

The result is pretty satisfying: we pop a Blu-ray of Ant-Man into our Panasonic DMP-UB900, and the skin tones on Hank and Hope van Pym (Michael Douglas and Evangeline Lilly) are balanced and natural-looking.

There’s also a decent amount of depth to the image, as Hope van Pym’s black hair and outfit stand out against the dark control room and distinguish between foreground and background.

When our titular hero (Paul Rudd) attempts to infiltrate an Avengers warehouse, only to be stopped by Falcon, the pale blue skies and surrounding greenery is captured pretty well - the M2600 shows the pastel colours without feeling the need to make them artificially pop.

It has a good handle on motion as well; when the two heroes inevitably fight, this television can keep track of Ant-Man’s changes in size or the agile manoeuvres of Falcon’s flight - for the most part.

There’s a little bit of blur when Falcon lands, the trees change from a crisp image to a bit fuzzy briefly as the TV keeps up with the action, but on the whole it manages well.

The M2600 also keeps those qualities throughout the range of resolutions available.

Putting the high-action heroics aside and changing to something more everyday, the M2600 has a good grasp of both SD and HD television, managing to look pretty sharp even on the lowest setting and without any noticeable noise. Reruns of Frasier or sport on the BBC are nicely presented for a television at this price.

The M2600 does have some room for improvement though: it’s not particularly punchy, which means that the excitement of watching Ant-Man enter the psychedelic, kaleidoscopic Quantum Realm at the end of the film is somewhat muted as the bright colours don’t come across as well as they should.

And we’d also like a bit more insight during shadowy scenes, as the M2600 loses a bit of detail in the darkness.

What’s pleasantly surprising is that the sound from this set is quite decent, dynamically. Playing the Gladiator soundtrack, the M2600 handles the ebb and flow of the rising volume midway through ‘The Battle’ with relative ease.

It’s well balanced, too; the low hums and high strings are kept in check without either feeling like it’s about to overpower the other. The midrange is pretty solid too, giving a competent performance.

While you’ll probably prefer having a soundbar or a couple of speakers connected to this TV, it’s not something that’s as much of a necessity as it is on other televisions.

As brevity is the source of wit, according to the Bard, we’ll keep our conclusion short. The M2600 is a television that presents itself without pomp and circumstance.

With a decent picture and solid sound quality to it, this HD Ready set will be a good addition to any room.

See all our Hisense reviews