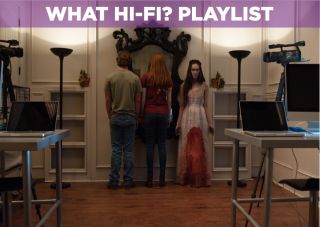 Mirrors certainly have their place in horror films - from ghosts, monsters and murderers suddenly appearing behind the looming victim in the bathroom mirror, to vampires that strangely aren’t reflected in them at all. Of course, we're also well aware that saying ‘candyman’ in a mirror five times summons a hook-handed serial killer.

Oculus is the latest ‘mirror horror’ to grace the genre. Based on its director and co-writer Mike Flanagan’s eponymous 2005 short, it tells the story of a mirror (or ‘oculus’) that twenty-something Kaylie (Doctor Who’s Karen Gillan) believes caused the death of her parents eleven years prior – a fatal tragedy that her younger brother Tim (Brenton Thwaites) was blamed, and institutionalised, for.

Now Tim has been released from the mental hospital ‘cured’ and is reunited with his sister, she reminds him of the promise they made to ‘expose’ the evilness of the mirror and destroy it.

It might not sound like a particularly original installation in the genre, but this fresh and creepy horror brings something new to the table.

The charm is in its intelligence. The plot combines two stories from two different timelines: Tim and Kaylie’s present ‘investigation’ into the mirror is continuously intercut with flashbacks to their family’s first experiences with it leading up until that fatal night.

The choppy narrative structure is unnerving and disorientating in itself, but while it could have easily have come across as disjointed and hard to follow (as dual narratives often do when they eschew linearity), it’s actually well delivered with coherent transitions and lucid storytelling.

The fact that you can’t put your finger on the truth due to the toing and froing between supernatural and psychological ground makes it a compelling journey form start to finish. It infuses a logic that's hard to ignore; is Katie now the one suffering from post-traumatic stress, or is the oculus really a killer mirror?

Either way you look at it, Oculus stirs dread and injects fear with subtle bump-in-the-night terror. And manages to reach in and rattle your bones in more ways than one.

Their father’s gradual transformation from a sincere, hard-working family man to psychotic killer is truly unsettling, and as each and every character loses grip on reality, they do some awful things that are, quite frankly, hard to watch.

But what Katie captures on her camera during the experiment is the pinnacle of the film’s horror. It’s terrifyingly chilling, and could well contain some of the scariest mirror scenes in cinematic history.

Every so often someone throws a curveball into the horror genre with something original, well-developed and genuinely terrifying. That’s just what Flanagan has done with Oculus.

Overlook a few acting slips and a slightly drawn-out plot, and you’ve got one of the scariest movies of the year.