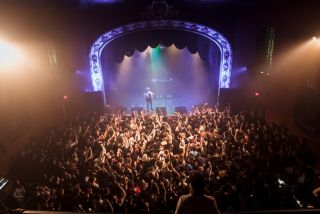 It’s no longer news: we’re not going to festivals, gigs, concerts, shows, operas or recitals. As a result of the global lockdown to curb the spread of Covid-19, events of all sizes have been nixed. From club nights to massive arena tours and festivals – coronavirus doesn’t discriminate.

So what can we, the fans, do for both our beloved bands (otherwise known as self-employed musicians) and the venues that host them during this challenging time? A fair bit, actually.

In a bizarre sense, we’ve never been closer – despite the imposed physical distancing. Here’s our cheat sheet to help you help your favourite music-providers during their time of need.

Know a mate who has a penchant for a certain band or venue? Birthdays and anniversaries come thick and fast, friends; think of how much a T-shirt, record or even fridge magnet might mean to someone you know.

Go straight to the band's website and make sure you're buying official merchandise (rather than heading to a huge online retail giant) so the band gets as big a share of the money as possible. Going straight to the source also means you're more likely to get a niche, limited edition selection – think signed items, bundle deals or special-edition vinyl presses.

Metallica launched a Vinyl Club subscription service just before lockdown: now is an ideal time to check if your favourite act is doing something similar.

Leading on from the point above, most of us know that buying an album nets the artist more money than a single stream of said tracks. Whether you buy a physical format or a download, it's a sure-fire way of ensuring more of your purchase price goes to the act.

To that end: if your favourite band has a new album coming out later this year, check if pre-orders are available on either their website or via other online retailers. This not only means that funds are coming in, it also creates a buzz, sending a message to retailers that the release is hotly anticipated.

Another idea: might bands you love have a crowdfunding site on Kickstarter, Indiegogo or the like? Check it out. Pledge what you can.

The above said, if parting with cash at the moment simply isn't viable, streaming more music at home remains a good way to do your bit.

However, while the fractions of a penny that services such as Spotify pay per play can add up if you’re collecting tens of millions of streams, they don't have much impact if your average track stream count only amounts to a few thousand. Tidal pays slightly more per single stream, but treating these services as a sampler menu – a way to test-drive a new act before buying – is another way to think of it.

If you find that a particular album is becoming a permanent fixture on your 'recently played' tab, why not go and buy it from an independent record shop, the band's online store or via Bandcamp? The latter is a splendid site which takes just 15 per cent of the profit from digital sales and 10 per cent from merchandise, meaning artists get a larger bite of the cherry.

There's never been a better time to discover what your favourite acts are really like and how they sound. Whether it's Niall Horan playing in his PJs, Train dedicating a heartfelt rendition of Calling all Angels to frontline care-workers on Global Citizen's 'Together at Home',  or Neil Young's fireside sessions, almost every artist you can think of is reaching out to fans from their homes – and you can stream it all.

Want to help save independent record stores (who often gain essential revenue from hosting live events and representing acts under their own labels) from closing, as a result of the coronavirus? Good on you. Meet Move the Record, a global initiative devised in response to the uncertain future that bricks-and-mortar record shops are facing worldwide. Its first online event was on 3rd and 4th July but more are scheduled. And let's not forget, the 33⅓ vinyl LP only just celebrated its 72nd birthday, so it's high time to celebrate the record.

On a human level, live music is something we can all benefit from right now. Even if you can't dip into your pocket, sharing with friends on social media or suggesting a Zoom watch party might mean someone else buys an album – or at the very least discovers a top new band to enjoy at home.

If theatre, opera or musicals are your bag, plenty of big and small companies (Sadlers Wells, Royal Opera House and Jasmin Vardimon, to name but a few) have launched streaming programmes with an option to pay what you can.

And the talented team at L-Acoustics in Highgate are hosting West End Unplugged, a series of star-studded, live-streamed 45-minute charity concerts every Wednesday throughout September, too.

Keep buying tickets to gigs (and keep hold of current ones)

This is the most direct and immediate way to show your support to both acts and venues. Buying tickets in advance rather than waiting and hoping to rock up on the night is the way – remember, shows can get cancelled if box office sales are slow. We can't think of a more fervent display of support and optimism than buying tickets to upcoming gigs right now. Even if the show is cancelled, you'll get a refund.

On that note, if you've got a ticket to a touring musical, dance show or comedy improv night that's already been axed, consider chalking it up to bad luck and letting the box office keep the money. Many local independent theatres receive no arts council funding, so your donated ticket fee will help keep the wolf from the door for another day.

Another one that doesn't involve spending your hard-earned cash. It might sound basic, but following your artist on any social media channel you can think of – OK, MySpace excepted – helps right now, as does signing up for newsletters and notifications.

Know a band or solo artist on the cusp of breaking through? Subscribe to their YouTube channel. See, accounts require more than 1000 followers before they can broadcast live. Subscribing will build up the act's following and allow them to reach a wider audience, which ultimately equals more fans and more sales.

By following acts during lockdown, you might also find that your favourite guitarist, drummer or bassist is offering lessons on Zoom – and who knew you'd ever have the chance to learn live from your favourite musician?

Top of our list here is the Musician's Union. Within the first ten days of coronavirus' impact, musicians reported a collective loss of over £20m owing to cancelled gigs, so the MU has launched the MU Coronavirus Hardship Fund, providing small grants of £200 to musicians in genuine financial hardship. Within two hours of launching the fund, the MU received more than 200 applications. If you can help, a small donation might make all the difference to a struggling orchestra member, music tutor or freelance session singer.

In the US, the Recording Academy (the folk behind the Grammys) and its charitable foundation MusiCares has set up the  COVID-19 Relief Fund for people in music hit by the coronavirus. The best bit? It works in conjunction with Spotify's COVID-19 Music Relief, whereby Spotify will match any donation you make up to a total contribution of $10m. Speaking of Spotify, the streaming service has also launched its Artist Fundraising Pick initiative, which lets you 'tip' bands or donate to their chosen charities through a tab on its streaming platform.

To support local music venues and arts spaces, the Virtual Pint campaign is a great shout. It's looking to raise £7000, of which half will go to the Music Venue Trust, and the other £3500 will go directly to help smaller venues across the UK. Simply buy a virtual bevvie on the Virtual Pint Just Giving page and they’ll sort the rest.

Help Musicians is another great charity (also supported by Spotify's campaign, above) offering advice and financial aid for musicians during these hard times.

To assist musical theatre performers and actors when every theatre on land and sea is dark, the Actors' Benevolent Fund has been supporting artists and stage managers in desperate need for 135 years.

In these socially distant times, the keypad is mightier than the sword and now might be the best time to start adding your signature to bring about change. Whether it's asking Spotify to increase the amount it pays artists per stream or requesting that the government offer economic assistance to the events industry (when there are no glorious events in any of our diaries), you can get proactive online without spending a dime.

But that's not all! If you've heard of a great initiative or you're hosting a special online event, leave a comment below. Use this humble platform to tell us – and our readership – about it. During times such as these, we need the music created by our beloved bands and artists more than ever. Let us celebrate you.