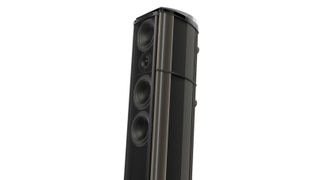 We're celebrating all things British hi-fi this week on What Hi-Fi?, so we had to include a round-up of our favourite sets of speakers to have emerged from these isles.

This list includes some big, some small, some heavenly high-end, some much more affordable - but all straight from the top draw when it comes to performance-per-pound value.

Our verdict? The hi-fi industry has been - and continues to be - spoilt with British engineering talent, as you can see for yourself from the following list of superlative hi-fi speakers...

The original Wharfedale Diamonds were the seeds for what has become one of the most successful speaker ranges of all time.

While speakers these days come in more shapes and sizes than ever before, these pint-sized efforts, standing at just 24cm high, were designed for those who needed a speaker to fit into a tight space.

They had a particularly praiseworthy midrange and bass considering their budget price, though they were slightly fussy in terms of partnering kit, working better with more upmarket amplification.

MORE: That Was Then... Wharfedale Diamond review

Heybrook was a British hi-fi manufacturer that started life in 1978 and was named after Devon's Heybrook Bay, which was near the site of the company's original factory.

Heybrook got off to a flying start after its inception, with the Peter Comeau-designed, entry-level HB1s proving a highlight of What Hi-Fi?'s early years. It was the first product to win three What Hi-Fi? Awards in a row, no less.

With a sealed box design, they worked well close to a wall, but aside from that, thanks to a high-quality finish and dynamic sound, the HB1s were another example of a speaker that could hold its own against much more expensive efforts.

Acoustic Energy's AE1s were also smaller speakers whose performance belied their size. They were capable of impressive punch and dynamic reach - in part thanks to their metal drivers, which were rare at that time.

They also weren't limited to one decade, evolving over several years and several variations to inspire what is today one of our favourite active speakers, the suitably-named AE1 Active.

We enter the '90s with Epos' ES11s, which were similar in sonic character to the legendary ES14s but available for a fraction of the price. A win-win, then.

As was usual for the brand, the crossover was minimal – it employed a single capacitor for the tweeter – helping them produce surprisingly sturdy bass and excellent resolution, in addition to superb rhythmic drive and dynamic expression.

A modest-looking but really musical pair of speakers, they could deliver just the right amount of aggression, delicacy and restraint as a song demanded.

The Studio 20s were, back in 1992, one of the most detailed-sounding speakers we'd encountered.

They needed some fine-tuning and a fair bit of running-in thanks to those metal drivers but, these issues aside, they were incredibly well finished and sounded terrific.

It was no surprise that their successors, the new-and-improved Studio 20 SEs, arrived a few years later and occupied our test rooms as our reference model for many years.

MORE: 13 of the best Monitor Audio products of all time

The 753s were an important speaker in Mission's history, ushering in a new slim floorstander design no wider than an, erm, ice skate (see above).

Both looking and sounding the business, they had a smörgåsboard of drive units with four 13cm drivers – two mid/bass drivers, two low bass units – and a single 25cm dome tweeter, through which a fast and punchy sound ensured whatever they were playing was enjoyably involving.

The Mercury M2s made an immediate impression when they burst onto the scene in the late '90s. Back then, we said they were the closest anyone had come to creating the perfect mass-market standmounter.

Quite frankly, our ears hadn't heard a more satisfyingly musical all-rounder at their price (£150), so it's hardly surprising that we called them "an extremely safe bet [that] will suit a wide variety of systems".

Five years after launching its first product, the Wilson Benesch Turntable, the British company launched a second: the A.C.T. One speaker.

Unveiled at the 1994 Frankfurt High End show, the floorstanders, were made mostly out of carbon fibre (like many Wilson Benesch speakers after them), introducing the world’s first curved carbon fibre composite panel in a speaker design.

These superbly-engineered and elegant-looking towers were the most analytical and musical speakers we'd heard before the turn of the century.

This side of the millennium we have the ATC SCM11s, which have, in various iterations, won more consecutive What Hi-Fi? Awards than any other speaker, thanks to their enduring class-leading transparency.

We've lost count of how many times we've committed praise to paper where these ATCs are concerned.

The originals were talented in various hi-fi disciplines – timing, dynamics, scale – and they would only get better with the 2013 iteration.

It would be sacrilege to not include one of Quad's legendary electrostatic speakers in this list, so here it is.

"Fifty years after its electrostatic speakers first wowed the hi-fi world, Quad breaks new ground," we said of the ELS 2805s in 2008.

These one-way speakers (meaning there was no crossover in the signal path) fired equal amounts of sound backwards and forwards, so care was needed setting up. Any bother was well worth it, though. The lack of punch and slightly lumpy bass were drawbacks, but in every other way they were truly exceptional performers.

Continuing the high-end trend, these £18,500 speakers represented the pinnacle of B&W's cutting-edge technology seven years ago. "The ultimate expression of all the company’s trademark technologies." This has since manifested itself in the latest Diamond range.

From tweeter domes made out of diamond, to cleverly braced and shaped cabinets, to cones made out of Kevlar, they were innovative speakers that at the time showcased unrivalled clarity, dynamic reach and volume. The bass was stunning, as was detail, and all of this sound was delivered with speed and punch.

The KEF LS50s were, and remain, blindingly good speakers. They've won multiple What Hi-Fi? Awards over the years and have recently formed the basis of active versions in the shape of the LS50 Wireless and LSX.

Of course, a hat tip deserves to be directed to KEF’s trademark Uni-Q array (an aluminium dome tweeter in the centre of a magnesium/aluminium–coned mid/bass), which was largely behind the LS50's insightful and musical, bassy yet balanced sound.

He who dares wins, right? With a sideways orientation that makes them look more like an AV centre channel speaker than a pair of stereo speakers, the 13cm-tall Neat Iotas were certainly different, but brilliantly so.

The Teesside-based speaker company's unusual design allowed us to experiment using them with the tweeters placed on the inside or outside, the latter of which we preferred. The Iotas sounded remarkable - big and bold, with plenty of detail, weight and scale on offer. And their tiny-boxed design only added to their appeal.

The strength of the competition at their sub-£500 price is always fierce, but it speaks to the talents of Q Acoustics' Concept 20s that they remain firm favourites.

They utilise what is still some of the company's top-tier technologies, such as the complex cabinet design that sees two layers of MDF separated by a lossy Gelcore material in an effort to dampen resonances. And due to such innovative engineering, they produce a multi-talented, all-round sound that delivers everything from punch and attack, to subtlety and precision.

The fact they're available at nearly half their original price these days is staggering.

Speakers from PMC’s Twenty range have not only been winning awards in recent years but also occupying our test rooms.

Few rival floorstanders are as musical or as balanced as the Twenty 26, whose strong dynamics, impressive detail, even tonality and seamless integration is hard to find fault with. These may not be the latest models in the Twenty range, but they are among our favourites.

It'd be easy to dismiss Spendor's SP2/3R2 as a retro throwback, but that would be to miss out on a stellar speaker that very much deserves the attention of anyone with a £3k budget. "Despite a design ancestry that dates back to the 1970s, there’s much this dinosaur could teach its modern competition," we noted in our 2016 review.

Sonically, they're huge, with a scale and authority that's made for epic blockbuster soundtracks. But there's absolutely no shortage of dynamics or detail either, and while they don't deliver the last word in punch or drive, rhythms are delightfully measured.