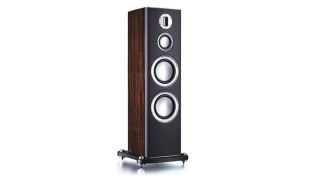 With over 45 years of speaker engineering experience, Monitor Audio is one of Britain’s most iconic hi-fi brands.

Since 1972 it has been honing its craft – first near Cambridge and now in Essex (although manufacturing has been in China for the last 15 years) – creating some of the best value speakers we’ve heard (as well as a jolly good stereo amp) along the way.

Here, to celebrate British Hi-Fi Week, we’ve picked our all-time favourite Monitor Audio products, from the current budget What Hi-Fi? Award winners to classic £2000+ floorstanders from the mid-90s to bookshelf speakers from the early ‘80s. And that spread of time and price points tells you all you need to know about the company’s versatility and consistency.

The earliest speaker that has made it on to this list was introduced less than a decade after the company was founded, so you could say Monitor Audio found its feet rather quickly. The R252s, which were designed by Robin Marshall post-Audiomaster (where he was a designer) and pre-Epos (which he later founded), received full marks in our 1983 review. We praised the £119 speakers for their “upfront” and “articulate” sound and “finely finished” cabinets, although we called them out for being a little bass shy next to their B&W DM110 and KEF Cantor rivals.

Jumping a fair way forward in both time and price, we find ourselves in 1990 with the Studio 10 standmounters, which featured the metal tweeter that had become part and parcel of Monitor Audio speaker designs. It was also the first to use a ceramic sandwich metal cone driver, which later developed into the C-CAM technology used in Monitor Audio speakers today. What that pairing offered was a consistent sound signature that was “genuinely sharp and analytical”, and while the £1000 Studio 10s were “no proletarian dream”, they were a reviewer’s one.

Pitted against the AR152s and a pair of Mission Cyrus speakers back in 1991, Monitor Audio’s £350 Monitor 14s came out on top in the value stakes. Built “like a breezeblock”, and offering “exceptionally good sound” from their 16.5cm mid/bass driver and 26mm alloy tweeter, they are among the British brand’s most successful floorstanding speakers to date.

We once had so much love for these Award-winning, cherry-veneered, £2300 floorstanders that they occupied our test rooms as our reference speakers. "Among the very best speakers" we had the pleasure of hearing in 1995, they were introduced just after Monitor Audio rebranded with a new MA logo that incorporated the company slogan, ‘As close as it gets’.

We found that the output from the 1in gold-plated aluminium dome tweeter and 6.5in aluminum-magnesium-ceramic cone woofer was, to their credit, so highly revealing that they really did require equally capable electronics. Two years later we referred to them as, "something of a hi-fi legend".

“Need sand filling... and large rooms!” Back when speakers needed to be weighted by sand, we did just that. The PMC703s were part of the company’s Profiled Metal Cone range (and not a collaborative effort with PMC) and entered the “territory of gobsmackingness” once they were suitably weighted and had a 24-hour run-in time. They played with "conviction and clarity", demonstrating a tightness of bass, speed, liveliness and rhythmic ability that sealed their five-star fate in the summer of 1996.

The mid-’90s: when Oasis, The Verve and the Spice Girls topped the charts, the first Toy Story hit cinemas, and Starbucks started selling Frappucinos. It’s also when we first clapped eyes and ears on Monitor Audio’s £700 Studio 2 standmounts, one of our favourite pairs of speakers back in 1997. Not for the first time, Monitor Audio delivered a pair of speakers that sounded substantially bigger than their dimensions might have suggested, offering an impressive sense of authority and scale for their size.

Apparently 1997 was a time when one needed an excuse to spend £300 on bookshelf speakers - and Monitor Audio’s Monitor 2 Golds were how to spend it. Representing "phenomenal value", they were easy for entry-level amplifiers to drive, sported a sweet sonic signature, and had a now familiar - and beautiful - real-wood build.

Under new management, the company’s Studio series was replaced by a new Gold Reference range, which included the Gold Reference 20, billed as a natural successor to the Studio 20 SE. The “immensely accomplished” £1499 floorstanders offered similar levels of resolution and an equally familiar fast, dynamic sound, but demonstrated a better balance thanks to improved low-end performance. “We have no choice but to recommend them highly,” we said in early 2001.

“Some of the best all-round speakers we know at this price,” we said of the RS6s in a 2007 Group Test review. It’s all starting to feel a little repetitive, isn’t it, but we promise we’ve never had an office parrot - such frequently used praise is simply credit, of course, to Monitor Audio’s consistency and quality. We noted the rival ATC SCM7’s slightly more revealing nature, however the £600 RS6s struck a very welcome balance between insight and entertainment and bridged the agility of a top bookshelf speaker with the authority of a tower speaker better than any other.

The £5000 Platinum PL300s were special not only for their exceptional sound (provoking our “some of the best speakers we've heard” claim) but also their ground-up design. They were among the first to use Monitor Audio’s in-house ribbon tweeter and they ditched the brand’s metal drive units for cones made from aluminium and magnesium skins. These skins were separated and damped by a Nomex honeycomb resin, which Monitor Audio called Rigid Diaphragm Technology. The cabinets themselves were also new, made from well-damped, mineral-loaded polymer. Ten years ago, these were "far and away the best speakers we've heard from Monitor Audio".

Monitor Audio replaced its Silver RS speaker range with the the Silver RX in 2009, making way for the RX6 speakers, successors to the aforementioned Silver RS6. The differences between the two weren’t initially telling. The new speakers also had a two-way arrangement, plus a “slightly clumsy-looking base… it’s a bit like watching Kate Moss posing in a pair of clogs”. Sorry, Monitor Audio.

But after closer scrutiny it was clear the RX6s used new tweeters as well as drivers borrowed from the Gold range, complete with C-CAM cones. A blast of The Dark Knight soundtrack - some things don’t change - was enough to unveil their “extremely inviting, engaging and entertaining” sound.

Another pair of… no, wait, the Airstream A100 was a stereo amplifier. While hi-fi speakers have always been Monitor Audio’s forte, it hasn’t been afraid to spread its wings to tackle other products over the years. There have been iPod docks, Bluetooth speakers and, most successfully, this quirky £400 amplifier from 2014.

Why quirky? Because it looks more like a Pixar character than a stereo amplifier, thanks to its thin, arched, upright design. It was head of the curve with streaming audio, too, sporting DLNA support, Apple AirPlay, and a hi-res DAC for good measure. It was a forward-thinking, impressive performer.

The last entry in the list brings us almost bang up to date with a 2018 - and 2017, 2016 and 2015 - What Hi-Fi? Award winner. “For their size, these speakers dig deep in the bass; they’re tonally balanced and impressively detailed too. Add fine build and Monitor Audio’s usual high standard of finish and there’s much to applaud here.”

The £279 Bronze 2 standmount speakers are our go-to speakers between £200 and £350, and are the latest evolution of an entry-level speaker range that is almost 20 years old. Here's to the next 20 years of Monitor Audio products...