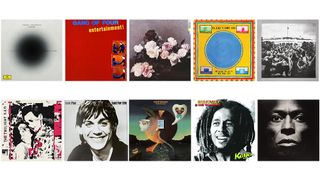 No longer is master-quality hi-res playback solely the preserve of the recording studio or even home hi-fi. Having launched its partnership with MQA a couple of years ago, Tidal's Masters tier can also be accessed through its Android and iOS apps, meaning subscribers can hear music in its intended glory wherever they may go.

There are thousands of hi-res albums available on the service already, but we’ve selected some of our favourites here to get you started and prove just what Tidal Masters is capable of. All you need now is to remember to bring your headphones.

Jóhann Jóhannsson is a composer who almost alone could prove the necessity of hearing recorded music at master quality. Orphée is the final solo album released before the Icelandic musician’s sudden passing last year; at times hauntingly melancholic, its marriage of orchestral movements and light-handed electronics is permanently beautiful.

Listen to Orphée by Jóhann Jóhannsson on Tidal Masters

Entertainment! by Gang Of Four

The near antithesis of Jóhannsson’s oft-ethereal arrangements, Gang Of Four’s debut album of 1979 as good as defines the word angular as a musical descriptor. Andy Gill’s guitar lines jut through Entertainment!’s schizophrenic phrasing like broken glass and benefit infinitely from having their lines this finely drawn.

Listen to Entertainment! by Gang Of Four on Tidal Masters

Power, Corruption and Lies was arguably the record that defined New Order as being a band apart from Joy Division. Its use of synthesizers is far broader than on Movement, but still intelligently intertwined with guitars and acoustic percussion for a sound that is at once texturally dense and refreshingly spacious.

Listen to Power, Corruption and Lies by New Order on Tidal Masters

Speaking In Tongues by Talking Heads

That you’ll find a number of Talking Heads records on Tidal Masters is undoubtedly one of the tier’s fortes as far as we’re concerned. Speaking In Tongues makes most of the higher resolution with its idiosyncratic grooves and playful instrumentation, not to mention two of the band’s finest moments in Burning Down The House and This Must Be The Place (Naïve Melody).

Listen to Speaking In Tongues by Talking Heads on Tidal Masters

To Pimp A Butterfly by Kendrick Lamar

Few hip-hop albums have influences so sprawling as To Pimp A Butterfly. From dub to free-form jazz, the backdrop to Kendrick Lamar’s magnum opus is ever changing and laced with subtleties despite its often abrasive delivery; this is an album deserving of the deeper listening the master files facilitate.

The Twilight Sad have never been shy of making a racket, and, despite its peppering of 80s-infused synth lines, IT WON/T BE LIKE THIS ALL THE TIME still revels in the kind of noise and cavernous reverb it’s difficult to bend your mind around with a compressed reproduction. The beauty remains in James Graham’s effusive vocal and near-gothic melodies, but the added insight here is invaluable.

Lust For Life by Iggy Pop

You won’t be lost for David Bowie’s work on Tidal Masters, but many of his finest hours were spent the other side of the mixing desk – including on this, his second production credit for Iggy Pop. Songs such as the title track and The Passenger made this Iggy’s most commercially successful album to date, and Lust For Life retains the garage rock aesthetic of The Stooges while treading a path that is unmistakably his own.

Listen to Lust For Life by Iggy Pop on Tidal Masters

If the idea of this improved sound is to bring the artist closer to the listener, then there can be few better examples of its importance than a suite as intimate as Nick Drake’s Pink Moon. As much as you can hear fingers shuffling between the strings and live in the body of Drake’s guitar, it is said intimacy that here helps foster an even more tender relationship between the listener and the music.

Listen to Pink Moon by Nick Drake on Tidal Masters

There were those critical of Kaya upon its release for being overly laid-back and concerned more with songs about love and marijuana than making political statement, but few could argue against its ten sun-drenched melodies or the fact they could be penned only by a talent as singular as Bob Marley’s. This 40th Anniversary Edition allows us to hear every element recorded at Island Studios in its full resplendent glory.

Listen to Kaya by Bob Marley on Tidal Masters

To another titanic genius of the 20th century who with this work fell somewhat foul of critics. Miles Davis’s Tutu is admittedly not an entirely cohesive listen, but it is no less intriguing a listen for it. Inescapably a product of the 1980s, its combination of synthesizers and drum machines that make a bed for Davis’s far-reaching trumpet lines perhaps shouldn’t work, but they photograph a creative mind that simply refused to be limited by genre.

Listen to Tutu by Miles Davis on Tidal Masters