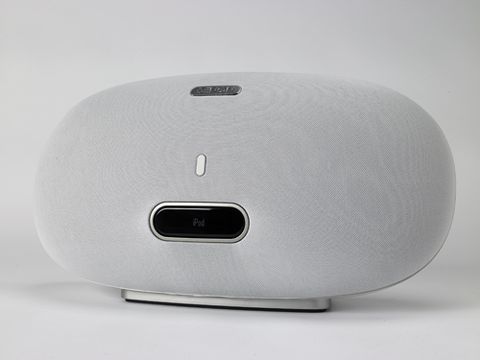 Denon’s first Cocoon didn’t contain any butterflies, but it did sprout a pop-out 30-pin iPod dock.

This new version ditches the physical connection: now you get wireless music streaming courtesy of Apple AirPlay and a simpler front panel. And still no butterflies.

It isn’t just a pretty fascia, either. The Cocoon Stream sounds excellent. Play Jay-Z’s BBC and that all-important bass part has plenty of weight, but crucially this doesn’t cloud the speaker’s judgement higher up the range. Percussion sounds sharp and precise too, and the Denon gives the vocal plenty of warmth and body.

It’s a similar case when streaming internet radio. The system searches relatively quickly and a quick blast of one of the many rock radio stations on offer shows that the Stream DSD-501 can mosh with the best of them without sounding hard or brittle.

Where a wireless speaker such as the JBL OnBeat Rumble sounds more frivolous and fancy-free, the Denon comes with a more measured, finessed approach to music.

There’s only one wired connection: a USB socket on the back panel for playing back from and charging an Apple device. Android users only get the charging feature.

Connecting the Cocoon to your network is as simple as plugging an Apple portable into the USB port, pressing the NETLINK button on the back of the unit, and typing in your network password to share it with the speaker.

There’s a basic remote control in the box, but we prefer the nicely presented Denon Cocoon app (available free for iOS and Android) for controlling the system. We tried the app on an iPhone and an HTC One with good results.

Its playback controls are neatly arranged, and the app can also be used to search and stream internet radio stations through the speaker (you can save three as preset favourites).

It can also be used to seek out and play tunes from any NAS (Networked Attached Storage) device on your network. If your Android device has a DLNA media player app, you can use it to stream to the Cocoon across your network.

We like the fact that Denon hasn’t strayed too far from its original design with the Cocoon Stream. It’s a great-sounding speaker that’s easy to set up and use – we think it would be a great replacement for an ageing system.