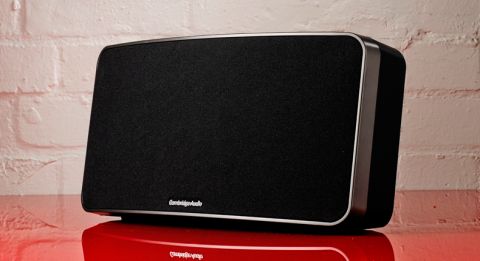 A bold, engaging performance, but there are more talented rivals out there

Given the success Cambridge Audio had with its debut range in the wireless speaker market last year, we’re not surprised to see it return with a new line-up to take on the 2014 market.

And this year the market is quite different. In 2013, if your speaker wasn’t packing AirPlay it was already outdated.

Now we’re seeing more and more brands (that once embraced it) shirking it in favour of simpler, more inclusive options such as Bluetooth.

Cambridge Audio has decided to remove AirPlay and use the money that would have lined Apple’s pockets to lower the speaker’s price and further invest in its performance.

Internet radio has been dropped too, but the two physical connections on the back remain - RCA ins for attaching the Bluetone 100 to your TV, for example, and a 3.5mm jack for hardwiring something like a smartphone or tablet to the speaker.

Looks-wise it is as uninspiring as its predecessor – a simple black box that’s well built and sturdy, but ultimately rather bland. Just a touch more flair wouldn’t go amiss.

Unlike the pricier Monitor Audio S300, the Bluetone 100 doesn't come with a remote control.

A single coloured LED lets you know which source is selected, and will also flash when pairing or changing volume. Once paired, you’re ready to start streaming, with high-quality aptX Bluetooth for compatible devices.

It makes a confident start, tackling Kanye West’s Black Skinhead with an upfront, but well-balanced character, effortlessly handling the aggressive bassline with solidity, punch and attack.

It’s weighty, and there’s plenty of control and agility here too. There is a bass dial on the back for tweaking how much low-end thud you’d like – we found somewhere around midway was about right for our tastes and placement (a little away from any back wall).

Balance is largely forgiving, thanks in no small measure to a smooth top end that helps make poorer-quality tracks more listenable (although this does rob the Bluetone of a little clarity). We wonder if we’d suffer a few sharper edges for a little more insight.

Speaking of clarity, we’re a little disappointed that the muffled midrange we heard in the Bluetone’s predecessor presents itself here too, robbing vocals of some of their texture and emotion.

We much prefer the clearer balance offered by rivals like the Samsung M5. For its size, it’s a relatively big sound and will go respectably loud, though competitors such as the Airstream S300 do better it when it comes to filling a reasonably sized room.

Tonally, it’s easy to listen to, and never becomes tiring or laborious.

We haven’t been quite as taken with the Bluetone 100 as we were with its box-of-tricks predecessor, craving more transparency and clarity.

Even so, its punchy, agile and well-balanced performance is not to be sniffed at.