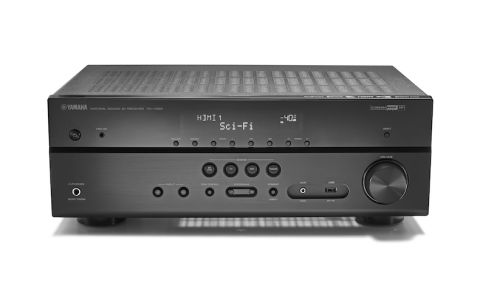 The Yamaha RX-V585 is close to being a really good home cinema amp, but its coarseness makes for a tiring listen

There are many well-worn clichés about attitude and talent, the lack of one sufficient to outweigh any abundance of the other. Attitude is not a word we’d generally use to describe hi-fi, but there are plenty of worthy substitutes to make the sentiment still ring true.

There are products that perform like class leaders, but would struggle to outlive a moth; those uncomfortable to wear or impossible to accommodate; or, most commonly, there is an element of an otherwise gifted presentation that fatigues, making it difficult to live with, in either the short- or the long-term. Unfortunately, the Yamaha RX-V585 home cinema amplifier falls into the latter category.

While the design of the Yamaha RX-V585 is busier and not quite as neat as its competitors – three strips of control buttons and split at the midriff with its upper half plastic and brushed metal below – the build and engineering are without fault.

Yamaha has packed this sub-£1000 AV receiver with features matching and surpassing many of its rivals. As well as Dolby Atmos and DTS:X capabilities, the company has installed its own proprietary Cinema DSP 3D software. This reproduces the acoustics of a number of concert halls as well as imitating height and surround back speakers in a 5.1 system.

In terms of music streaming, all the major services are integrated, including Spotify, Tidal, Deezer, Qobuz, Pandora and Napster. Bluetooth and AirPlay are included, while the integration of Yamaha’s MusicCast allows the RX-V585 to become part of a wider multi-room network alongside Amazon Alexa compatibility.

Potential buyers should note, however, that the RX-V585 has only four HDMI inputs and one output, and all are HDCP 2.2 enabled for 4K and HDR playback. Four inputs will be enough for most, but with the Denon AVR-X2500H having double that, it’s worth considering if you plan on having a host of sources passing through.

Elsewhere, there are two coaxial and single optical inputs, alongside five analogue – one being the 3.5mm aux on the front – and USB. So there are still plenty of ways to make up to 7.2 channels sing.

Set-up is via Yamaha’s YPAO technology which, while requiring a tad more fine tuning than Audyssey or Sony’s DCAC EX, gives us a base to work from. After that, it’s a long weekend’s burning in and we’re ready for our first taste.

The Yamaha RX-V585 has a long list of talents, beginning with an open, airy soundstage that seems to extend beyond the walls of our test room and into the film. That open, airy sound isn’t a case of the presentation lacking weight, though. It’s solid and punchy too, with plenty of low-end to force through those moments of impact.

We play Passengers, and the Yamaha translates both the open abyss of outer space and the crashing intensity of a failing ship with well-controlled power. Detail levels are decent as well, as is timing both in general and as sounds move around our speaker package.

Dynamically, the Yamaha fails to match up to a receiver such as the Sony STR-DN1080, but those are extremely lofty heights for which to aim and the RX-V585 is certainly not dull or without life. On pretty much any checklist we could make for testing home cinema amps, it would score well across most of its categories. Most, but sadly not all.

The amp lets itself down with seriously hard edges to the overall sound. Leaving the amp playing for another couple of days does little to relieve the issue and, though it’s by no means excruciating, our ears tire quickly because of this tough edge to notes. Simply put, the sonic balance is not conducive to longer periods of listening.

To some ears it may be less of an issue, especially considering the RX-V585’s wealth of talents and features, but even if that's the case for you, this product undoubtedly requires careful partnering. This means source, speakers and cables: anything with a marginally coarse presentation could tip the overall performance over the edge.

It’s a shame, because there’s much to like about this Yamaha. In fact, we like most things about it, but we simply couldn’t see ourselves being able to live with its overbearing coarseness - and in such a competitive market, there's no reason to.