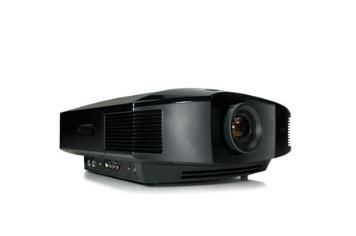 A subtle image that lacks a little excitement at times

It's fair to say we don't think Sony has done too much wrong where projectors are concerned.

Looking to build specifically on the success of the VPL-HW10 and HW15, Sony's most recent £2k projectors, comes this, the HW20.

Instantly recognisable as a Sony chassis, boasting more style in a glossy, curved body than most other projectors on the market, it has the necessary connections and specification inside, too.

Vertical and horizontal position adjusters on the top of the unit combine with focus and zoom controls on the lens to make set-up a cinch, while video inputs include two HDMIs, PC and legacy sockets.

An SXRD panel is in charge of the key projection work. This is Sony's proprietary system built around liquid crystal on silicion (LCOS) display technology, similar to JVC's successful D-ILA units.

The latest incarnation of this panel claims 30 per cent better brightness compared to previous generations, and a claimed contrast figure of 80,000:1 (though we're wary of putting too much weight on these figures). Naturally it's all set for 1080p/24fps, HD content.

Quiet in operation
It's certainly quiet in operation – Sony claims the fan noise can be as low as 20dB – and there's an instant polish to the picture. Despite claims to the contrary, it doesn't offer the punch of LCD models, instead preferring a likeable, smooth, rich picture.

Colours are natural, with the HW20 coming in to its own with films such as Green Zone, where the gritty landscapes and skin tones on the Blu-ray transfer show the Sony capable of delivering impressive insight and texture.

Films with bolder colour palettes aren't conveyed with the same sense of vitality and excitement as elsewhere, the Sony settling on something a little more subdued, and like most projectors, fast motion could be smoother.

If you like a more refined, easy-on-the-eye image, and tend to prefer films with more natural, textured colour palettes, the VPL-HW20 is well worth considering – but it isn't quite the all-round star performer.