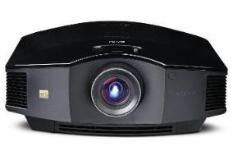 The price of this Sony has been up and down like a portable projector screen in the past six months or so.

We tested it at a far cheaper £1750 in our December 2008 issue, at which point it threatened to be available for even less if you looked hard enough.

Yet, here we are now with a retail price of around £2100. Having said that, once again, at the time of writing we've spotted it a little cheaper in places.

We were big fans of Sony's VPL-HW10 when we saw it first, but with three new challengers – from Epson, Panasonic and Sanyo – and a slight tickle on the price tag, we're interested to see whether it still holds off the competition.

Tip-top specification
Certainly we've no qualms with the specification. This is an SXRD (Sony's version of LCD) design, with a wide throw ratio that gives you plenty of flexibility in terms of picture size and distance from screen.

Setting up the projector isn't quite as ingeniously simple as with other rivals, but it's still reasonably foolproof thanks to easily accessible zoom and focus controls on the lens and machine itself.

Fiddly remote, but a fine picture
The menus are predictably clear and intuitive, though the long, chunky remote control is a little cluttered and we're not sure about some of the button placements – it certainly can be fiddly in low-level lighting.

Still, we're happy to report that the picture is every bit as good as we remembered. Fast, tricky-to-track motion can be a little unsure, but otherwise we're smitten with the Sony's natural, insightful delivery.

Gomorrah reveals skin tones that are given colour and warmth yet remain realistic, while the 'HW10 delivers solid black levels alongside punchy brighter hues – and all with crisp edges.

There's no denying this is a projector that still warrants serious attention. While there are small areas where the 'HW10 might be pipped for pole, as an all-rounder it remains a must-audition at the £2000 price mark.