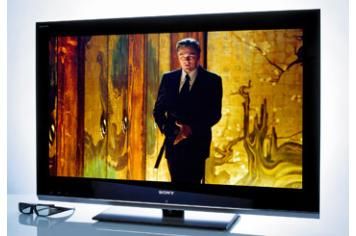 If its 3D pictures were up to the job, the 40LX903 might be worth the money

There's often a decent spread of prices in our tests. We indulged in a comedy double-take, though, when we confirmed the price of this Sony 40-incher. £2200? Really? Is it suddenly 2006 again? Still, a price is only unreasonable if it can't be justified, and the Sony has a manful try even before it's switched on.

For instance, it offers all the online catch-up services (BBC iPlayer, Demand Five and loads more) you'll require, has a Freeview HD tuner, backlights pictures using edge-arrayed LEDs, will play music and video via USB, and synchs to its 3D glasses using an integrated system.

This last might not sound like a big deal – the £850 Samsung LE40C750 does the same thing – but the less expensive Sonys we've seen use an external bar similar to the Nintendo Wii's, which is far from elegant.

Set-up and use are simple
Sony's mastery of on-screen menus and the straightforward remote is well known, and the LX903 is child's play to set-up. The fact that it doesn't have huge tweakability doesn't hurt, either.

Picture performance is impressive. The Sony is blessed with TV tuners the equal of anything else we've tested, and TV reception is a winning combination of strong contrast, good black-tone variance and stable motion. The colour palette is large and subtle, and the Sony excels at describes variations in lighting.

It's an equally efficient upscaler of DVDs, and is more than a match for a mainstream DVD or Blu-ray player. The Sony is pretty much unflappable with motion, too, and black shades are deep and detailed.

Skin-tones and textures are grand, though picture noise can creep in when the going gets tricky. Blu-ray images, on the other hand, are strangers to noise even under the most trying circumstances.

Lustrous, detailed and ruthlessly stable, high-definition pictures combine deep, informative blacks with prodigious depth of field and the same deft ability with contrast that the LX903 exhibits from the off. Edges are smooth and motion is stable.

To say that the Sony's composure falls apart when it's asked to produce 3D images is overly dramatic, but judged against the rest of its performance the LX903 is a coarse and flaky 3D machine.

Disappointing 3D pictures
Cloudy with a Chance of Meatballs is plagued by cross-talk problems that regularly render movement uncertain, and the screen's insistence on ramping up backlighting and contrast to the (unadjustable) maximum on receipt of a 3D signal scuppers its outstanding prowess.

And while we're finding fault, its sound is shockingly sibilant even by the humdrum standards of flat TVs.The KDL-40LX903 was going to have to turn in an excellent performance in every respect to justify its optimistic price.