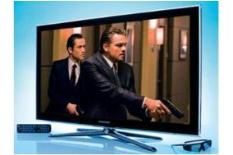 If you're a ‘toe-in-the-water' sort of consumer rather than a bleeding-edge early adopter, then Samsung's LE40C750 could be for you.

It earned its five First Test stars when we initially looked at it in the November issue, and back then it cost £1000. It's not a huge leap of imagination to realise that at £850 it represents even better value.

It lacks LED backlighting, and the LE40C750 is a relatively bulky 8cm deep, but unless you're determined to hang it on the wall that's not too much of a handicap – and besides, the stand is swish. Otherwise, it's as robust and stylishly finished as we expect from Samsung TVs.

PVR and 'net features impress
Neither does it betray its relative affordability where specification is concerned: Freeview HD reception, 200Hz motion processing, four HDMI inputs (with version 1.4 featured) and a brace of USB 2.0 sockets is hardly scrimping.

Use a USB stick of more than 1GB capacity, in fact, and the Samsung becomes a PVR, recording and time-shifting TV programmes using its excellent EPG. The remote control is more prosaic, but the on-screen menus are comprehensive and it isn't a tricky device to get set up.

There's little in the way the C750 performs to make you feel short-changed, either. TV reception is stable and disciplined, with good control of complex patterns or tricky motion.

Colours are natural, contrast is strong and the Samsung manages to combine decent black-tone depth with a degree of black-tone detail that some pricier rivals might envy. Overall detail levels are acceptable too, though textures and edges can present as fractionally soft.

It's a similarly assured performer when asked to upscale a DVD of O Brother, Where Art Thou?. Blacks remain deep and even, the colour palette is convincing and the Samsung handles motion without trouble.

Depth of field is impressive too, and though the ‘C750 isn't immune to picture noise and the same softness can pervade complicated scenes, it's eminently watchable.

A great introduction to 3D
This Full HD panel was made for HD content, though, and with Blu-ray the Samsung is altogether more refined. Comfortable with glaring contrasts, stable with motion and dishing up high levels of detail, it makes its price-tag look like some kind of administrative error.

Strap on your 3D goggles and the 'C750 remains thoroughly enjoyable, with by-no-means typical brightness and good grip of motion (except in the extreme near-field, which can smear occasionally and fall victim to the cross-talk between left- and right-eye that's dogged 3D TV since the get-go).

The Samsung even sounds OK by prevailing standards, a likely by-product of its relative bulk. Overall, it's an absolutely ideal way to get a feel for the brave new world of 3D TV without breaking the bank.