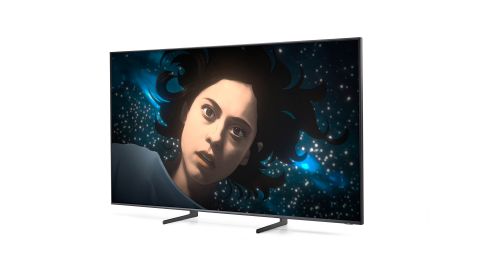 The Q950R is a very good TV, but it doesn’t quite convince us to take the 8K plunge just yet

Of all of the TV manufacturers out there, Samsung is pushing 8K the hardest. If we were being cynical, it could be seen as an attempt to take the discussion away from OLED vs QLED and on to a new technology with which the company can lead the charge.

On the other hand, the company’s determination to get its 8K TVs into homes before content arrives is resulting in some surprisingly affordable models. Take the QE75Q950R, for instance. The model it replaces launched at £6999 and here we are, a little more than a year later, with an 8K TV set costing £2000 less.

Admittedly, the upgrades are fairly minor. The Q900R that went before it arrived late in 2018, so was already ahead of its 4K contemporaries, and the update to the Q950R is designed to ensure it has the headline feature of the company’s 2019 flagship Q90R 4K model – namely wider viewing angles. In other countries, this update isn’t even considered worthy of a new model number, so what we call a Q950R in the UK is still known as the Q900R in the US and Australia.

But, while the updates have resulted in an undeniably better TV than the one that went before, this is still in some ways a less capable set to watch than its flagship 4K sibling, even before we even take pricing into account.

The Q950R looks practically identical to the Q900R it replaces, and that’s both good and bad. It’s huge and imposing, and boasts neat ideas such as feet that can be installed at either end of the bottom edge, closer to the middle for those who need a smaller footprint, or hidden in recesses in the set’s rear if you’re wall-mounting.

It makes a nice wall-mounted screen, with the flat back and fairly thick, straight edges giving it the look of a huge frame. And, of course, you can actually use Samsung's Ambient mode to display art, should you wish.

But if you expect a next-gen picture format to come in an equally next-gen wrapper you’re likely to be disappointed. There’s nothing in the physical design that screams ‘the future is here’ and that’s a shame, especially when Sony’s 8K sets do tick that box, albeit at a vastly elevated price.

One of the best design elements of Samsung’s top-end sets is the One Connect box, which sees all inputs, outputs and processing hardware moved out of the main chassis and into a separate box connected to the screen by an almost impossibly thin umbilical cord. This cord even carries power from the One Connect box to the screen, so the panel doesn’t need its own mains connection. Like that of the Q900R, the Q950R’s One Connect box is much larger and heavier than that of Samsung’s 4K sets, but not to such an extent that it can’t be easily hidden out of sight.

The One Connect box’s connections include four HDMIs, one of which is fully HDMI 2.1-certified, which means it can officially handle 8K signals at up to 60fps, if and when 8K sources finally appear. All of the TV’s HDMIs also boast features such as Variable Refresh Rate (VRR), which matches the display's refresh rate to the frame rate of an incoming signal for a smoother gaming experience, and Auto Low Latency Mode (ALLM), which automatically triggers the set’s Game mode when it senses a signal from a console.

Of course, physical video sources are becoming increasingly secondary to streaming services, and here Samsung is king. Just like its flagship 4K siblings, the Q950R supports Netflix, Amazon Prime Video, Google Play Movies & TV, Rakuten and even the brilliant Apple TV app, all in 4K and HDR (HDR10+ in the case of Amazon Prime Video). On top of that you get access to all of the UK’s core catch-up services, as well as Now TV, BT TV and BT Sport. Music streaming is covered by Spotify, Tidal and Deezer, while Plex is on board for those who want to stream their own files.

That array of content options is presented to you by the most pleasant operating system in the business. Samsung’s Tizen is slick, responsive and intuitive, getting you to what you want to watch as quickly and effortlessly as possible. Samsung has also done a great job of streamlining settings – there’s plenty of opportunity to tweak but fewer ways to lose yourself in a calibration labyrinth.

In terms of picture technology, the Q950R shares its predecessor’s resolution (7680 x 4320), number of dimming zones (in the region of 500) and huge peak brightness figure (4000nits). It’s also got the same Quantum Processor 8K, which, among other things, uses machine learning to upscale all content to the TV’s native resolution.

The big difference is the addition of the Ultra Wide Viewing angle feature first seen in the 4K Q90R model. This involves extra layers on the panel to reduce light leakage and spread light uniformity. The result is excellent viewing angles – close to those of an OLED. Almost no matter where you sit in the room, you will see the Q950R performing at or close to its best.

We’ve extolled the virtues of 8K before – unbelievable detail, exceptionally lifelike images, almost indiscernible pixels – but we’re still no closer to a date for ‘proper’ 8K content to become available. Buy an 8K TV now and it will be at least a year and possibly a lot longer before you have any 8K content to watch on it.

So, what matters now is how the Q950R performs with current content. We fire up Captain Marvel on 4K Blu-ray. As Vers looks out of her window on the planet of Hala, the futuristic city below is crisply and solidly rendered. It’s an image full of detail and depth. In fact, it looks a bit more three-dimensional on the Q950R than it does on the Q90R.

It’s punchier at times, too. You might expect a step-up from 2000nits to 4000nits to be striking, but the difference is subtle – a slightly brighter twinkle from some of the city’s lights and a marginally more piercing burn from the jet engines of the Kree dropships as they approach the planet of Torfa at the start of the Search and Rescue chapter.

But this scene also illustrates a comparative weakness of the Q950R. It doesn’t dig up as much dark detail, and some of the action on the gloomy planet surface is lost in the murk. The Q90R, meanwhile, goes just as black (both sets go very deep for non-OLEDs) but reveals more from within the shadows.

Our main gripe when comparing the Q900R to Samsung’s 2018 flagship 4K TV, the Q9FN, was that its colours lacked vibrancy, however, things seem to have gone too far the other way here. It’s worth bearing in mind that there’s no logical reason that the colours should be different at all (standard sample variation aside) so the fact that they are is interesting.

Playing Guardians of the Galaxy Vol. 2 and with the same settings selected, the Q950R’s delivery is noticeably pinker than that of the Q90R, making skin tones and the ploughed fields of Missouri look somewhat overdone. At the same time it’s less lush in the greens of the grass. We up the Contrast Enhancer, switch Colour Tone to Cool and adjust the Colour setting, but no matter how much we tweak we can’t get the balance quite right. It’s not a huge issue, but every so often you’ll be presented with a face that looks just a bit sunburnt.

Meanwhile, motion is handled identically by both sets, which is to say imperfectly. The default setting results in motion that looks overly processed and is prone to shimmer around tricky motion. Turning everything off, meanwhile, leaves motion with a little too much judder and blur. Our preferred compromise is the Custom mode, but even here, the Samsungs are beaten for smoothness and clarity by the best Sony and Panasonic sets.

While the upscaling is impressive and you’re rarely given any indication of the amount of processing that’s going on, really close inspection does occasionally reveal some minor jagged edges that look straight on the Q90R.

But if the quality of the upscaling is impressive when the incoming signal is 4K, it can be considered borderline miraculous when dealing with 1080p and even standard-def. The amount of data being created by the Q950R is staggering, so the fact that in terms of clarity, control, detail and sharpness it gives more or less nothing away to the Q90R is a serious achievement. You won’t want to spend much time watching standard-def, but the fact that you can is remarkable.

Samsung has so far resisted the trend for premium TVs with overt, upgraded speaker systems. Instead, its current models feature drivers hidden in the chassis. It’s perhaps predictable, then, that the Q950R can’t match these more sonically focused TVs – but it sounds good in its own right.

This is a fairly rich, full-bodied delivery, but naturally so. It doesn’t have the kind of artificially boosted bass that’s common of TV sound, or the tonal peaks and troughs. It’s instead more authentically weighty and consistent through the frequencies. It combines directness and width quite effectively, too, particularly in the Adaptive mode, which tweaks the sound based on your room.

What it lacks next to the best-sounding TVs is the scale and dynamism to make more of an action set-piece, but the Q950R’s sonic deficiencies can be easily rectified through the addition of a soundbar or a dedicated home cinema system.

Justifying the purchase of an 8K TV when 8K content is still a long way off is tricky. But our feeling is that if there’s no performance downside when compared to the best 4K TVs available, there’s no harm in those with the money splashing out now to be ready for when it arrives.

The problem is that when feeding the same content into both the Q950R and Q90R, we’re still too often drawn to the Q90R’s delivery. Surprisingly, this has less to do with resolution than with colour balance and black performance, but it’s an issue all the same.

On the plus side, with Samsung having already more or less nailed the upscaling, it really shouldn’t be hard to bring the other performance elements in line with the company’s flagship 4K sets, and that bodes well for next year’s 8K model.