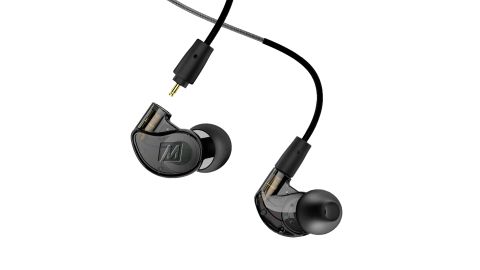 Mee Audio has filled out the sound of its budget ‘pro’ earphones, but the treble is still a little too sharp for comfort

You won’t see many musicians playing Wembley Arena with £40 in-ear monitors (IEMs) in their ears, but by labelling its latest pair of earphones, the M6 Pro 2nd Generations, as ‘professional monitor earphones’, Mee Audio is aiming them squarely at musical types. With a budget price tag of just £40, the company will also hope that these in-ears have a wider appeal too.

The Mee Audio M6 Pro 2nd Generations certainly look like a decent pair of ‘pro’ earphones. Their cabling drapes over your ears to increase stability and decrease microphonics.

You can remove the cable from the earpieces, a feature common among IEMs costing a lot more than this, but not so common in pairs costing £40. The smoky translucent cable sheath is a little classier than plain, opaque black too.

From a distance, the Mee Audio M6 Pro 2nd Generation look the part. But up close, the flaws in the design become more obvious and they don’t look quite as impressive.

Earphones of this style often use balanced armatures, with carefully routed tunnels for the sound. However, the Mee Audio M6 Pro 2nd Generations’ standard dynamic drivers look like those of an A-level design project – transparent designs work best when you have something to show off, but there’s not much to see here.

The only other design complaint is that the M6 Pros don’t have an in-line remote, but this is fairly common among pro earphones. You may need to get used to the shape-holding part of the cable by the earpiece, which is a little less malleable than that of some pricier rivals.

Once fitted properly, these M6 Pros will do the job for running and gym work, as well as checking sound levels on stage. They are IPX5 rated, so can handle sweat in whatever situation you use them.

The Mee Audio M6 Pro 2nd Generations sound significantly better than the original M6 Pros, launched in 2015. But the core characteristics remain the same. Mee Audio has beefed up the sound so that the thin sensibility of the original is gone, but unfortunately the sharp treble remains.

The 2nd Generations have a pronounced treble, but lack the high-quality drivers needed to pull off this signature without obvious harshness and sibilance.

Sharp treble can give some songs a lift, by promoting higher-frequency detail, like adding a squeeze of lemon or lime to a drink. Balance is important, though, and the Mee Audio M6 Pro 2nd Generation’s treble is a little too pronounced. Sibilant songs are fatiguing as sharp sounds crowd the ear.

Elements outside of the higher frequencies are rather good for the price. Bass is deep and punchy and well-balanced for an affordable earphone.

That energetic treble mixes with a solid mid-range, which is particularly apparent in vocals. The fact that those mids aren't a tangled mess remains important, and goes some way to justifying that ‘pro’ tag.

There's good separation between the solid, relatively tasteful bass and mids, and dynamics are decent for the money too. These earphones are an improvement over the original model, but it’s not quite enough to bump them up to a higher score.

Distractingly sharp and granular treble is still the Mee Audios' defining quality. Rival pairs such as the Beyerdynamic Soul Byrds and SoundMagic E11Cs offer a much more cohesive sound that doesn’t flare up with certain tracks.

The Mee Audio M6 Pro 2nd Generations are ‘professional’ IEMs at an entry-level price. While they represent an improvement over the original M6 Pros, with a fuller sound, they have not lost their distractingly prominent treble. As a result, we find it difficult to fully recommend them.