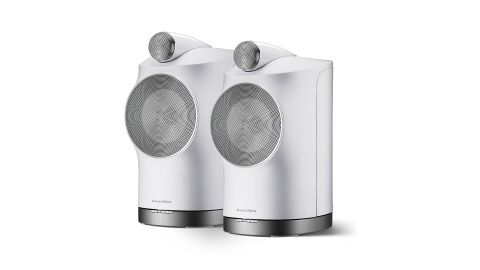 The Formation Duos are wonderfully accomplished and sophisticated wireless speakers

Bowers & Wilkins may have arrived rather tardily to the multi-room party, but at least it's making a big entrance. Here before us is the B&W Duo, a pair of wireless active speakers and a highlight of the company’s Formation family of multi-room products, which includes a soundbar, a sub and even a spiritual successor to the iconic, single-box Zeppelin.

Synonymous with high quality sound and artistic industrial design, the hi-fi world has been itching to see what B&W would come up with. It has chosen to design its own wireless system, rather than license anyone else’s, which partly explains the delay.

B&W’s proprietary wireless system reduces any latency of playback between products to one millisecond to ensure that there’s no audio drift between stereo pairs, something needed for the kind of performance expected at this level.

With its trademark decoupled tweeter on top, the B&W Duo won’t be everyone’s cup of tea aesthetically, but there’s no denying that it has style. Available in either black or white, the cabinets are sculpted from two pieces of a polypropylene/wood fibre-based material known as Formi, fused together from front to back in clamshell style with a dampening element in between.

The cabinet is further braced by an internal matrix structure, which is designed to reduce unwanted resonance from a cabinet.

Powering each speaker are two internal 125W digital class-D amplifiers. The drive units are a paired combination of other successful B&W products. The 165mm, Kevlar-like, Continuum woofers are modified from those within the five-star B&W 805D series. The carbon dome tweeters are from adapted from the 705s and, of course, decoupled from the main cabinet to help reduce vibration interference from the mid/bass unit below.

That mid/bass has been redesigned to work within a sealed cabinet, as there are no reflex ports on the B&W Duo. That places a heavier reliance on the drive units alone to produce the bass but with the potential for a cleaner, tighter sound at those lower frequencies. It also makes the Duos less fussy than typical rear ported designs when it comes to placement near to walls.

In fact, you’ll find little else around the backs of the cabinets because the B&W Duo speakers are wireless. Of course, they aren’t totally wireless in the sense that each speaker still needs a mains lead to power it, but there are no other cables required. There is a USB port on each one for firmware updates and also an ethernet port in case you need a physical connection to your home wi-fi.

However, B&W Formation products work on their own, exclusive wireless mesh network, which they create throughout your home, only using your home network as a last resort.

This is a big advantage. It means that the fidelity of multi-room connection and the quality of playback are not affected by whatever else is going on with your home network. Performance will not suffer because someone is streaming 4K Netflix or playing online games in another room - so long as your overall internet bandwidth isn't maxed-out.

The Duo speakers synchronise with one another through a pair of dedicated internal receiver/transmitters, one of four such wireless modules within, all of which are shielded from the others by limiting their operation to certain frequencies.

There is a pair of 2.4GHz receiver/transmitters for communication with the music source, another pair working at the 5GHz bandwidth for multi-room communication with other Formation products and Bluetooth as well. Each one remains isolated from the other throughout our tests, with no drop-outs or interference.

The only other external features you’ll find on the Duo are the trio of buttons at the base of the speakers for manual volume control and pause/play. There’s also a single Formation button for cycling through inputs.

Beneath all this you’ll need some stands. The dedicated B&W Duo stands (£699) aren’t cheap, but they complete the look beautifully. Once bolted to the grey-bottomed Duos, it’s difficult to tell where the stand begins and the speaker ends. They can be mass loaded with sand to improve stability.

Hardware is only half of the equation where streaming is concerned, with software also crucial. B&W's made some interesting decisions concerning the latter - decision that it only just gets away with.

If you want to go down the multi-room route, it's well worth considering the Formation Audio (£599), which connects to your existing hi-fi system, integrating all of your traditional wired sources (such as a CD player and turntable) into the wireless network while also outputting streams to your standard amplifier. It's like a Sonos Connect, but much prettier, thinner and posher.

The Formation app isn't designed to handle the day-to-day control of your music, though. For that, B&W recommends Roon, a music management subscription service that costs $119 per year or $499 for life, and it ties all of the inputs and outputs under one app while also giving you access to the music on any Roon-ready devices you might already own, including network players and servers.

It largely works really well, although things can still get a little complicated at times – name zones in both Roon and the Formation app and they won’t necessarily line up. You can also group products in Roon in a way that won’t show up in Formation but, given that Formation is needed for the set-up and maintenance of your system, you can’t just go with Roon.

Even though between the two apps, every detail and function is covered, we would like to see a stronger, more comprehensive Formation app to take care of everything. You shouldn't really have to pay for a third-party service to get the most out of your expensive new wireless speakers.

What we do love about the way Formation works is that, once up and running in multiple rooms, the need to think about how it is structured fades away. Any music streamed to one Formation product can be played on any other Formation device in the network. It doesn’t matter which room the music is in, or which room a speaker is in, just press the button and the beats begin to flow.

And, strictly speaking, you could avoid Roon if you really wanted to. Both Spotify Connect and Apple Airplay 2 are built in, so the Formation Duo speakers will appear in Spotify and (if using an Apple device) most other streaming apps. If you're using an Android phone or an app that's not AirPlay compatible, you can still send music to the Duo speakers using Bluetooth, right up to the higher quality aptX HD standard if your player supports it.

This sort of broad support of standards is great in many ways, but the multitude of options does mean that you’ll need to chop and change playback software depending on your source material and then switch to the Formation app to select the right speakers in the right rooms and even to control the volume if there isn’t a variable output on your source app. In other words, Roon is definitely the best solution currently available, even though it's a cost option.

From the first bars of Seeya by Deadmau5 (feat. Colleen) it’s clear that these speakers have real energy. The spring of the bass guitar, the razor sharp hand claps, the high hats and buzzing electro-synth samples time so beautifully together that it’s impossible not to nod along.

Excellent dynamics make them punchy performers and by the time Colleen snakes her vocals so coherently through the sounds, any worry about wireless lag between the two speakers evaporates. The Duos sound gorgeous.

We switch to something more delicate with 50 Ways To Leave Your Lover by Paul Simon and, again, we’re blown away. The intro shows off the easy agility of the Duos once more but it’s the bass that takes us by surprise this time. It punctuates the rolling snares with the tightest of double hits to the kick drum.

Grippy and with the kind of authority and punch you’d expect in high-quality floorstanders, it’s the ideal backdrop to the artful lead guitar and vocal detail every time Simon and his backing singers kick in. Each movement of his fingers up and down the fretboard, each sound as he changes chords takes you right into the studio.

There’s an even tonal balance as the song skips from gentle verse to upbeat chorus. With little audible sound from the speaker cabinets, there’s incredible clarity to the notes and a transparency that quickly makes us fussy about the quality of what we choose to listen to, with the 24-bit/96Khz wireless transmission more than enough to deliver the goods.

While the Duos deal admirably with Spotify’s MP3s and Tidal’s FLACs, these speakers will show up any lack in quality from the source material. So, we start ripping CDs by the dozen to get back to WAVs and enjoy every track. If you are serious enough about your sound to buy a pair of speakers such as these, then you really need good quality source material to appreciate the benefits of what these talented standmounters can do.

With Ariel Ramirez’s mass Miss Criolla, sung by José Carreras, these speakers prove that there’s no need for any wiring. Their stereo imaging is as on-song as the Spanish tenor. We close our eyes and the broad soundscape is as clear as a picture. It’s easy to forget that it’s just two boxes making the sound. The cabinets themselves are quiet and their large-scale dynamic ability brings huge drama to the live composition. They are capable of great power in the loud moments and a soft beauty for the quieter passages.

We play the White Stripes’ Ball & Biscuit and Meg White’s drumming is exposed in all its bald glory, with the jangling too-loose snares seasoning Jack White’s thrummed chords. It’s a pleasure to appreciate this kind of audio quality at the price at which these Duos are pitched.

By absolute standards, you might notice that their character is cultured and arguably a little too smooth in moments when the music demands more grit. There’s missing crunch to the sound when listening to White’s guitar scratch its solos. They’re not quite there for that 100 per cent authenticity of sound. But, for their class, for their features and functionality, for their delivery of stylish, convenient, wireless, multi-room mastery, the Duos are peerless.

This is a great wireless product and nothing comes close to it right now. The Duos are deadly precise speakers with excellent precision and a speed of performance that makes you want to dig out tune after tune.

While we'd certainly prefer a single app to handle every function, the multi-room feature set is at least complete and the current, imperfect software arrangement is more than made up for by the superb audio performance.

Read all our Bowers & Wilkins reviews