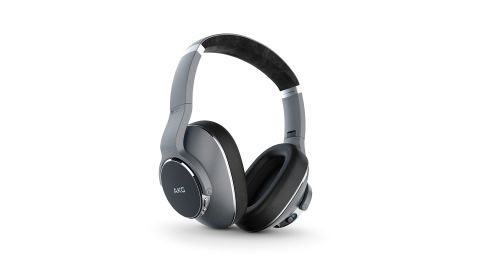 A solid pair of wireless noise-cancellers, but these AKGs don’t have the skills required to worry the class-leaders

We don’t start many of our headphone reviews with a critique of a carry case, but we’re quite taken with the fabric-covered effort that comes with the AKG N700NC over-ears (£309/$349).

It’s deep enough to double as a child’s lunchbox. Seriously. Two Babybels, a ham sandwich, a yoghurt and a carton of Ribena should just about fill it to capacity. But as impressive as the carry case is, we’re reviewing a pair of Bluetooth noise-cancelling headphones, specifically the AKG N700NCs.

First impressions are positive. The build quality is solid. Most surfaces are smooth silver plastic and there’s a contrasting rubberised finish on the circular covers which bear the AKG logo.

Chrome and silver accents around buttons and the edges of earcups give the headphones a bit of a visual lift too. We think AKG has missed a slight trick by only offering this silver finish, which cheapens the appearance a touch. A black option would have been an easy win.

The hinged design means portability isn’t a problem. They can either be laid flat for storage or folded up and dropped in a bag. Or you can use the matching case, of course.

The leatherette-clad memory pad cushions comfortably envelope your ears. The earcups have a good degree of swivel so they can they be angled to achieve the best fit. We’d describe it as firmer than the Sony WH-1000XM3, but perfectly fair. There’s an additional layer of cushioning under the headband which allows them to nestle on your head without digging in.

The AKG N700NCs use Bluetooth 4.2 but, like the Bose QuietComfort 35 II, we find it strange there’s no aptX compatibility which allows owners of compatible smartphones and tablets to enjoy higher quality audio over Bluetooth. The lack of aptX Low Latency support also means the headphones are more prone to lip sync issues.

The button arrangement is pretty straightforward, with all the controls spread across both earcups. They’re found on the edge of the circular sections where you can see the AKG logo. Controls are on the left, with power and noise-cancelling options on the right.

A long press on the volume down button skips back, while up skips forward. The circular button between handles play and pause. All the buttons respond with a solid, confident click.

The power button is more of a slider. Slide and hold for three seconds to start the pairing process. You’ll then be prompted to download the AKG Headphone app, which we’d suggest you do.

The app allows you to control the Smart Ambient feature that comes with the AKGs. It’s split into two different elements one of which can be assigned to the N700NC’s Smart Ambient button found on the right earcup.

The Ambient Aware feature drops both the sound level and the noise-cancelling down a notch so more outside audio is allowed through and into the earcups. It works reasonably well, but is less effective the louder the volume you listen.

Talk Thru on the other hand drops the volume completely so you can have a conversation or listen to announcements. It’s slick in operation – our only niggle is that it doesn’t pause your music once it’s faded out. If your conversation drags on you’ll miss part of your music.

The app also gives you access to the headphone EQ if you want to play around with their balance. And it gives you the option of enabling the Auto-off feature, which could comes in handy when you want to preserve battery life.

Battery life is 20 hours with Bluetooth and noise-cancelling turned on, rising to 36 hours if you forgo wireless for a wired connection. The AKGs charge via micro-USB – some people might prefer USB-C but for us it’s not the end of the world.

In the box, there is an airplane adapter, USB charging cable and headphone cable with a one-button control that will work across most mobile devices.

Switching between these and rivals, such as the Sony WH-1000XM3s or Bose QC35 IIs, you’re aware the AKG’s don’t quite display the same prowess when it comes to noise-cancelling.

They don’t suck all the external sound out of the earpads in the same way the best do. In our busy office, we’re still aware of certain noises, and we never really get the same feeling of isolation and clarity that you get from rivals.

The AKG’s are easy enough to listen to, with a solid and controlled sound.

Playing Bloc Party’s Different Drugs highlights the AKG’s preference for clearly defined edges as the both the high hat and the kick drum sound punchy and pointed. There’s decent pace to the track too, with the flowing and more staccato elements blended nicely together. The lead vocal is given focus and solidity within the soundstage.

Playing Tokyo Myers Bloodstream, there’s a good sense of solidity to to the piano notes but the AKGs struggle to communicate the dynamic shifts and subtleties in the notes. Rivals, including the Sony WH-1000XM3s and B&W PXs, extract more more detail and handle the delicate keystrokes with greater care.

As the track gets into its stride and as the strings and choir bleed into the song, the AKGs also don’t follow the tracks rhythm as effortlessly as the class leaders. When the track explodes into life, the N700NCs display a good sense of weight and power, but again, the rivals capture and convey the drama with more finesse.

The AKGs produce a solid performance, but it never quite reaches the heights we had hoped for. The very best headphones in this category deliver a higher standard of sound quality and also boast superior noise cancelling.

That’s not to say the N700NCs don’t have plus points – their solid, confident sound is appealing in itself – but there aren’t enough of them to elevate their rating above four stars.