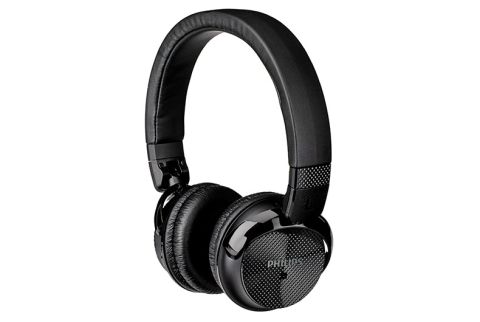 A pair of headphones that look as good as our Award-winners, but aren’t quite as sonically sound

If imitation is the sincerest form of flattery, then the Philips SHB8750NCs are being very nice to the Award-winning SHB8850NCs.

Superficially, these two pairs of headphones share many of the same features and even have some sonic traits in common - but there are still significant differences.

Overall, these headphones aren’t quite as finely balanced as their twin.

The only aesthetic change between the 8750 and 8850 review samples is the black on the housings and headband rather than silver.

They have the same noise-cancelling functionality, volume and playback controls as the 8850s, as well as the same hinged, rotating earcups hiding the 32mm drivers.

As these are Bluetooth headphones, there’s a micro-USB port for charging, but if you find yourself low on battery you can also plug a jack into its 3.5mm connection.

Put them on your ears, however, and the differences between the two Philips headphones soon reveal themselves.

Play The xx’s Shelter and Romy Madley Croft’s vocal has a decent amount of expression and clarity. It’s detailed enough to reveal just how breathy the song is.

Move on to Infinity, a track that needs headphones with plenty of spatial awareness, and the 8750s don’t disappoint.

When recording the song, Oliver Sim sang on the opposite side of the room from Croft, and the distance between the two singers can certainly be appreciated.

Tonally, the 8750s do lean more towards the lower frequencies. The thumping, low-frequency synths in Fantasy are moved further towards the forefront and help the song establish its foundations.

The heavy kick-drum that underlies No Church In The Wild by Jay Z and Kanye West sounds just a touch imprecise from these cans. They could do with being a bit tighter and having more punch.

They also don’t quite have the same dynamism, especially through the midrange and treble.

Playing The Game Is On from the BBC’s Sherlock, the high-pitched piano sounds a tad strained, and there isn’t enough attack quite to capture the same sense of life that the 8850s do.

And, changing to something more demanding, the headphones want for the organisation of the 8850s.

Holland, 1945 by Neutral Milk Hotel is a distorted track that needs to be handled firmly. Though the 8750s make a good attempt, keeping the vocals and horns above the noise, the drums and guitars aren’t easily distinguishable.

An audiophile hermit would, no doubt, be perfectly content with these headphones.

They’ve got solid sound quality and a fair bit of bass that is impressive at this price.

However, the 8750s don’t exist in a vacuum, and are implicitly set against the 8850s because of their similar design, feature set, and cost.

Weighing the two against each other, the scales tip in favour of the 8850s, and as such they are the ones to retain our recommendation.