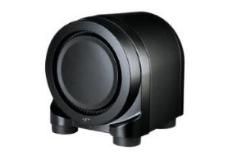 A brilliant newcomer to the small sub class: if you’re in the market, it’s a must-hear

Subwoofers tend to fall into one of two camps: either they're small but limited, or massive and ever-so-slightly barmy.

Paradigm's Seismic 110 attempts an elusive Third Way: it's just 34cm high and 30cm wide, yet it features an improbably powerful 850W amplifier, all the better to assault your ankles with lashings of low- end energy.

On its rear, the Paradigm features the usual manual adjustments for crossover, phase and volume, plus a USB input designed for use with the company's optional PBK-1 ‘Perfect Bass Kit'.

Sounds superb in action
In action, even without calibration, it sounds superb. Few compact subs get close to its extension or agility: indeed, for one so muscular, it is surprisingly fleet of foot.

The PBK-1 kit tightens the sound up still further, taking off some of the slight overhang to the trailing edge of bass notes to leave you with spectacularly well-resolved low frequencies.

So far so special. There's only one thing standing between the Paradigm and five stars: B&W's PV1 – £300 cheaper.

It could be argued that the Paradigm has a slight edge for overall extension, but the PV1 is at the very least the 110's equal for musicality. Still, the Seismic 110 is deeply impressive – in every sense.

See all our subwoofer Best Buys