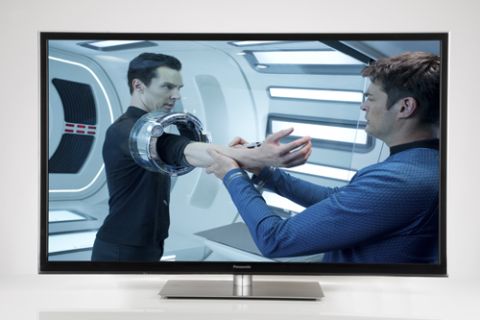 Panasonic’s GT range has been a favourite of ours for a few years now, and the TX-P50GT60B isn’t about to let its good reputation down.

One of the great things about the Panasonic GT line-up is that it offers a lot of the high-end features that you might see in some of the pricier ranges, but with a much more affordable price tag.

This means you can expect the latest NeoPlasma Black 3000 panel that you’ll find in the high-end VT and ZT ranges; Freeview HD and Freesat tuners; pro-standard picture-tweaking thanks to THX and ISF certification; and an all-round outstanding performance.

The design of this 50in TX-P50GT60 is a little on the chunkier side compared with the super-slim LCD screens out there, but that’s something we’ve grown used to with plasma TVs, and the set's fantastic build quality more than makes up for a slightly thicker bezel.

Connectivity is good, with three USB ports, internet connectivity via LAN or built-in wi-fi and three HDMI inputs. That’s one less HDMI than last year’s models, but three should suffice for the majority of set-ups.

It’s the picture that really steals the show here. And, even better, it’s already great out-of the box – only a few little tweaks are needed to make it really shine.

Its contrast is simply brilliant: the TX-P50GT60B shows off a remarkably deep black-level performance, even by plasma standards. Dark scenes are packed with detail, with inky blacks happily sharing the limelight with clean, bright whites.

Complementing this is a beautifully natural colour palette. Colours still pack a punch when required, though, and are vivid and rich throughout.

Life of Pi on Blu-ray is always a great test for colour reproduction, and the P50GT60B does a superb job, demonstrating a great balancing act with the bright colours from the animals and realistic skin tones of Pi and his family.

Best of all, we didn’t find this affected by viewing angle, with colours remaining vibrant and never washed out wherever we sat (within reason).

There’s an astonishing level of detail here too, giving a fantastic sense of depth to landscapes and bringing an admirable texture to skin tones and fabrics. This plasma set thrives on high-def content, producing crisp, well-defined images that look nothing short of stunning. Fast motion is handled expertly too.

Broadcast TV, even in standard definition, looks good on this GT60, and exhibits the same strengths found in the set’s Blu-ray performance.

Upscaling is admirable, and while there’s some softening of edges and a drop in crisp detail, you won’t be deterred from watching standard-def channels. This Panasonic TV makes very few mistakes when it comes to picture quality, regardless of source.

Over to 3D and the GT60’s active-shutter performance is crisp, stable and immersive. There’s next to no crosstalk and an enjoyably subtle and convincing 3D effect. This set’s bright picture helps colours to keep their vibrancy in 3D although, as always, watching in a darkened room is the best way to get the most from it.

With Panasonic’s processing lending a touch of help, motion is tackled just as deftly here as it is in 2D. You get two pairs of lightweight, comfortable glasses included in the box too.

The TX-P50GT60B has a well-balanced sound with plenty of clarity to dialogue and enough weight to stop it sounding insubstantial.

That said, the soundstage isn’t huge, leaving explosion-heavy action scenes somewhat lacking in power and size. To get a satisfying rumble from scenes like this, you’ll need to upgrade to a soundbar at the very least.

The GT60B features the same smart TV features as the rest of Panasonic’s 2013 line-up, with My Home Screen proving a huge improvement on the company’s previous attempts. In fact, it’s one of our favourite 2013 smart TV platforms when it comes to ease of use.

But while the range of apps has been boosted, offering only Netflix and BBC iPlayer from the big name smart TV apps seems a little stingy. There’s still some catching up to be done if it wants to worry the likes of LG and Samsung on the apps front.

Read more on My Home Screen in our Panasonic TX-P55VT65B review.

The Panasonic TX-P50GT60B is great-value set that offers a ton more than you might think. Picture quality is second to none at this size and price, while the truly excellent contrast reproduces dark scenes exactly how they were intended.