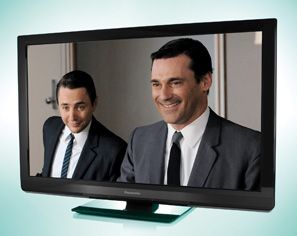 Some manufacturers are more optimistic than others when it comes to pricing. Or perhaps some just like to build in a lot of headroom to let retailers offer eye-catching ‘discounts’.

Either way, unless you’re a Lottery roll-over winner, you needn’t concern yourself with the £950 Panasonic’s own online store would like to relieve you of for the TX-P42G30. Even those who pay the £700 we’re quoting could try harder.

Spec (and performance) heavy
Regardless of discount, though, you can at least revel in the knowledge that you’ve bought one of the better pound-for-pound 2D plasmas.

Compared to, say, the Samsung UE40D5520, the Panasonic is a bit chunky, but the frame encloses plenty of tech. Freeview HD reception, USB recording, Viera Connect online functionality (wireless if you shell out for a dongle)… it’s even got an SD-card reader.

Oh, and THX certification – though we found Panasonic’s preset THX mode a touch murky with whites.

If you’ve used a Panasonic TV made in the last dozen years then you know the TX-P42G30’s remote control, and in conjunction with clean on-screen menus it makes the Pana straightforward to set up.

There’s a little more finessing of motion handling to be done than we’d like, but ergonomically the G30 is fine.

Good performance with HDTV
It’s also fine when receiving high-def TV. Black levels are impeccable: inky and deep but with sufficient detail to keep you fully informed. Contrast is punchy, motion is handled with tremendous assurance and picture noise is suppressed pitilessly. Textures, too, are convincing.

Upscaled DVDs enjoy a lot of these positives as well – particularly the delightful blacks and the corresponding facility with contrast.

There’s a slight but undeniable softness to our DVD copy of No Country For Old Men, mind you, and consequently a rather vague way with edges. Within that, though, detail stays high and motion is gripped manfully.

Those wrongs are righted with a switch to Blu-ray. The Panasonic is a really impressive high-definition performer, dealing out prodigious levels of detail, distinguishing explicitly between textures and generating gratifying depth and insight into black tones.

Beautifully lit pictures impress
The G30 lights its pictures beautifully, too – doubtless a by-product of its excellent contrast, and it deals with even the toughest motion without alarms.

Sound-wise, the G30 is on the toppy and hard side, though it’s quite open and doesn’t incorporate the brazen sibilance some rivals are so keen on. No, our biggest (perhaps our only significant) concern is with the colour.

Unlike every other non-Panasonic screen, there’s a deal of fine-tuning to be done to achieve a neutral balance – it’s doable, but without thoroughly investigating the sub-menus the G30 overstates green tones slightly but consistently.

So, set aside an extra 10 minutes at the start of your G30 ownership, and then you’ll be in possession of a cracking TV – even if you do end up paying as much as Panasonic thinks you should.