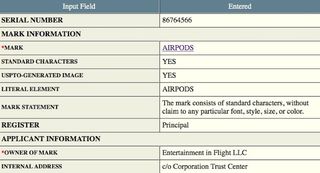 When Apple introduced the Lightning connector on the iPhone 5, speaker docks had to change their connection too. However, it also had the effect of boosting the number of wireless speakers on the market, with manufacturers wanting to release products that would work with multiple devices and weren't tied to a particular connection.

Could Apple be aiming to kickstart a similar move from wired to wireless in the world of headphones?

The information, uncovered by Mac Rumours, show a company called Entertainment in Flight LLC, based in Delaware, filed the trademark application. However, this could be a front company - this filing is its only visible operation and Apple has used this technique in the past to keep its plans under wraps. The application mentions audio accessories and earphones, and with the current crop of Apple’s earphones being called EarPods, it’s easy to see why the connection has been made.

Having bought the Beats Audio brand last year, it could be that Apple is looking to upgrade the accessories on offer and add to the existing range of Beats by Dr. Dre headphones.

The Cupertino tech giant has also recently filed a patent for a new D-shaped headphone connector, which won’t work with existing headphones - the perfect time to push wireless headphones, perhaps. It seems changes to headphones are high on Apple's agenda. Could it be the end for the infamously leaky Apple earphones? We’ll wait to see what launches alongside next year’s iPhone 7.