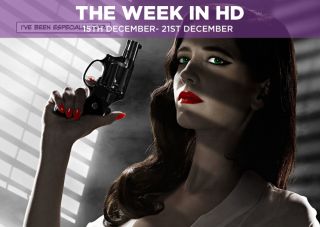 Of course you want the complete series of Star Trek: The Next Generation, lovingly remastered in high-definition Blu-ray. Or, it'll be the perfect Christmas gift for the Trekkie in your life. Hop on board the Enterprise and boldly go forth with Captain Picard and his crew as they go on a myriad of adventures across space and time, battle Klingons and the Borg, and Riker grows his manly beard.

With seven series across 41 discs, this iconic sci-fi series is best enjoyed with a cup of tea. Earl Grey. Hot.

And if we could indulge in a bit of pre-Christmas malarky, press play on the video above to get into the festive mood.

Buy Star Trek: The Next Generation at Amazon

Sin City 2: A Dame To Kill For

As with the original, Sin City 2 serves up a handful of slightly intersecting storylines. The opening section has a thug terrorising a bunch of obnoxious students. Elsewhere, a cocky gambler messes with the wrong people. A femme fatale torments her ex-lover. A stripper tries to take down a politician.

It's been nearly 10 years, but a walk down the dark alleys of Sin City is just the violent, sexy, and over-the-top noir homage we remember it to be. Nearly everything is starkly black and white, broken by splashes of colour. The novely factor may have worn off, and the stories aren't as punchy as in the first film, but it still looks beautiful.

MORE: Read our Sin City 2: A Dame To Kill For film review

When a rapid-response team is sent to investigate the mysterious death of 206 passengers on a plane, the lsat they were expecting was an outbreak of vampirism. The first series has had mixed reviews, but The Strain treats vampires as an infectious epidemic rather than as something vaguely romantic, grappling with real-world consequences when the virus strain escapes into the world.

Adapted from the horror novels by Chuck Hogan and Guillermo del Toro (of Pan's Labyrinth, Hellboy and Pacific Rim fame), the show is worth a whirl for horror fans.

LoveCraft. Gordon has crossed the line one too many times going up against the mayor, and finds himself reassigned to Arkham Asylum.

The best part of the episode: Alfred being badass and singlehandedly striking fear into the hearts of Gotham's underworld.

Flash vs Arrow. It's the crossover two-parter DC fans have been waiting for: Oliver arrives at Central City to handle a boomerang-wielding villain, while Barry deals with a metahuman who can manipulate emotions.

The crossover concludes in the Arrow time-slot.

Christmas. Mary Berry and Paul Hollywood are back for a festive baking session with six holiday-appropriate winter treats, including Swedish St Lucia buns and a fruit-filled yuletide genoa cake. Yum.

After suffering a dismal defeat at Old Trafford, Liverpool head to Bournemouth for this Capital One Cup tie. And it won't be easy - Bournemouth are playing well and Brendan Rodgers's team look like they're low in confidence.

It's finals week! Our five chefs - Jamie, Sven, Danny, Brian and Darren - are first tasked with an invention test that will see one of them leave the competition for good.

Then the final four face The Chef's Table - a prestigious event where they must cook for 25 of Britain's greatest professional chefs.

What Kind of Day Has it Been. It's the final ever episode of this Aaron Sorkin drama, and Will and Mac take a nostalgic look back at the news they've covered, the life they've had in the newsroom, and what the future holds for them.

Another first round of creating a delicious, perfect dish, and the least-impressive will get sent home.

The final trio are sent to San Sebastian in Spain to cook for Adoni Luis Alduriz, after which one lucky chef will be crowned MasterChef Champion 2014 in the grand final next Tuesday.

The Brave and the Bold. The Arrow/Flash crossover continues, with The Flash whizzing over to Starlin City to help Oliver and his gang search for Digger Harkness. Odd name, but we suspect there'll be some nifty city-saving action scenes in store for us.

The Climb. Right after the crossover, Oliver locks horns with Ra's Al Ghul (yep, he got bored of annoying Batman so he's moved on to another billionaire masked vigilante), being given just 48 hours to find Sara's killer. Or else Batman's former mentor (and former Liam Neeson) will set the League of Assassins on to him.

In the tense series two finale, Stella Gibson frantically searches for clues to find Rose Stagg. But Paul Spector, despite being held behind bars, does a Hannibal Lector and eats people thwarts her attempts at every turn.

...Ye Who Enter Here. S.H.I.E.L.D. manages to get to the secret ancient city before Hydra, but their discovery may cost one of the team the ultimate sacrifice. Secrets are unveiled and a tasty tie-in with Marvel's greater cinematic plans comes to the fore.

Lumped Together. Proof that with even a pantheon of topics at their disposal, the QI Elves sometimes have no choice but to lump a lot of facts together without rhyme or reason. David Mitchell, Ronni Ancona and Jimmy Carr join Alan and Stephen to discuss everything L-related from lava lamps to love handles (BBC's description, not ours).

Say you're a hitman, and you've been ordered to off your former mentor. After you do (if you chose not to, that's a different film altogether), you feel so bad about it you decide to take your now-murdered mentor's son under your wing. And teach him assassin-y stuff? Boy is that kid going to be miffed when he finds out the truth.

Anyway, Jason Statham's in it.

Excellent documentary about Johnny Cash's now-legendary concert for the inmates at California's Folsom Prison in 1968. With insights from Cash's band, family members and former members, this is a must-watch for any occasion.

After a recent slump, reigning champions Manchester City have returned to winning ways, but injuries have affected them and they'll be short of a few important players when facing Crystal Palace. Palace, on the other hand, will be looking to kick on from their promising draw against Spurs by taking points off Pellegrini's men.

Charming and fluffy Christmas film about grumpy teacher Paul Maddens (Martin Freeman) being put in charge of his primary school's musical nativity play. Faced with unwilling and difficult students, his ex and the annoying rivalry of the neighbouring posh school who wins every year, Paul has to drum up enough holiday cheer to inspire the adorable children to put on the best show their town has ever seen.

The Grey Sisters. Ariadne is mortally wounded, and Jason takes on the mythical Grey Sisters to attempt to change his beloved's fate.

His Last Vow. It'll be another year until we get a brand new episode of Sherlock (the much-awaited Christmas special in 2015) but it's worth reminding ourselves of where we last left the dynamic duo. Amid stolen letters, false identities and mind palaces, Sherlock vows to bring down Charles Augustus Magnusson - the king of blackmail and the one man he truly despises in all of England.

Bells. Edmund Blackadder resurfaces in Elizabethan England and has developed a worrying crush on his servant, a girl named Bob.

After his inventor dies, a young man with scissors for hands is taken in by a kind, suburban family. But while teenager Kim (Winona Ryder) falls in love with Edward, the neighbours turn against him and his strangeness, rendering him an outcast once more. Tim Burton is at the height of his powers in this beautiful Gothic story, with a young Johnny Depp in the leading role, and the legendary Vincent Price in one of his last ever appearances on screen.

The Clue of the Savant's Thumb. Magician Jonathan Creek and paranormal investigator Joey Ross team up when a dead body vanishes from a locked study. A classic case of the locked room mystery with the supernatural, magical illusions and government conspiracies thrown in.