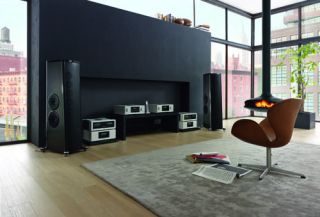 T+A has unveiled five new products at CES 2014 – three of which are new additions to the German company's range of high-end, high-voltage audiophile hi-fi separates.

Starting with the P 3000 HV, the new pre-amplifier comes with seven unbalanced and four balanced inputs. T+A has used identical 'double-mono' circuit construction, as well as housing each section within its own compartment for increased internal shielding.

The unit comes with a "totally linear and interference-free" power supply with "totally separate analogue and digital supplies." These also come with their own power input.

A high-end headphone amplifier is also built into the device.

The A 3000 HV also plays host to a 1000W torrodial transformer, which is sealed in an aluminium enclosure.

It connects to the A 3000 HV via T+A's 'Power-Link' and in doing so, supplies the power output stages. The internal power supply of the power amplifier meanwhile drives the sensitive input stages and high-voltage amplifier.

The use of the optional power supply isolates the A 3000 HV from the load currents and mains-incduced interference.

A new 1000 Watt power amplifier is included and thanks to digital processing and a microphone, the TCD 610 W SE can be automatically calibrated to any room.

The CARUSO Blu has internal speakers, so can therefore be used as a standalone unit. Alternatively, thanks to pre-amplifier output, it can be connected to an external pair of speakers.